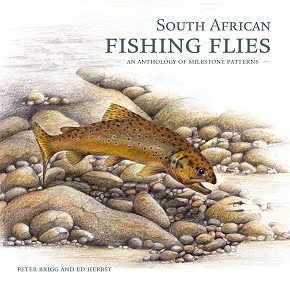 An anthology of milestone patterns

Many years ago on a press junket for the launch of a new car we were taken to Dullstroom, Eastern Transvaal, now Mpumalanga, and on the programme was an introduction to fly-fishing. It was an interesting few hours but what really intrigued me were the names of the suites at the luxury hotel. I stayed in one called the Hackle, and only later did I learn that it was the name of a fly, a British fly, apparently. All of the suites were named after flies.  And not the annoying insects that buzz around the braai fire where the meat is sizzling or the lone one hovering above you at the dinner table. These are flies used to catch freshwater or saltwater fish.

Now Peter Brigg and Ed Herbst have produced the quintessential book on South African Fishing Flies. Brigg who is retired and lives in the Eastern Cape is a freelance writer and author of the acclaimed Call of the Stream (2008) and he also publishes a blog of the same name. Ed Herbst, a retired journalist who lives in Cape Town but still contributes to online publications like Politicsweb and Biznews, has been fishing since he was a schoolboy in Durban. He became interested in fly-fishing when he moved to the Cape in 1978 and in 2011 he was made president of the Cape Piscatorial Society.

The book tells the stories of the anglers who have invented their own flies which have changed the way fishermen tempt their catches.

Ted Leeson wrote in his book, The Habit of Rivers, that the fly is the starting point, no matter how technologically advanced your rod and reel.

Herbst posits that the first imitative dry fly to be used in South Africa was probably the Mooi Moth (1900), used to imitate massive mayfly hatches. Others include the Mountain Swallow (1935); Walker’s Killer (1950s), which had its origins in New Zealand; the RAB (1965), the most famous dry fly on South African streams and the Red Butt Woolly Worm, the fly that ended the reign of Walker’s Killer as the favourite wet fly in the 1970s.

Roger Baert’s first angling memory was at the age of five on the coast of Japan. A broken arm prevented him from swimming so his father took him fishing instead. Baert has been fly-fishing all over globe: Sweden, Bavaria, Iran, where he worked as a guide taking photographers and outdoor sportsmen to trout streams, pike waters, waterfowl havens and into the mountains. His fly is the Hover Dragon Nymph.

Another interesting fly is the Papa Roach developed by Herman Botes who writes that fly-tying is a creative mixture of design and art and he used it to great effect in the still waters of Mpumalanga.  Peter Brigg uses the Crane Fly and believes that when designing flies you should look at the way the fish perceives them. One day while he was fishing, he explains, he was surprised to see a dragon fly aggressively attacking his Crane Fly, which he thinks was a sign of approval.

Ed Herbst writes about Harry Stewart, who started tying flies at the age of 10 in his native Glasgow. Two of his iconic flies are The Millionaire’s Taddy and Harry’s Termite. In 1951 he emigrated to the then Rhodesia and spent the next 30 years fly-fishing. Harry owned the Troutbeck Inn in the Nyanga mountain range. Later he started Stewart’s Trout Flies and used the neck feathers of the Cochy-Bonddu hens for use in the flies he made. The hens lined up for Harry and waited for him to pick them up so he could pluck the feathers he needed.

There are many stories like this in South African Fishing Flies and the developer of each one has his own anecdote of how he developed them. The names of the flies show a great deal of imagination and the flies themselves are ingenious. As there are not many secrets in the fishy world the fly-tyers for the most part tell you how to make them. Some of the more unusually named flies include the Powder Wad Crab; the Dog’s Breakfast; the Carp Fritz and Sunken Terrestrials. The full colour images are by Peter Brigg unless otherwise stated.

There are about 100 000 fly-fishers in South Africa and according to Brigg, fly-tying is growing exponentially, thanks to more books on the subject, small groups of enthusiasts, the Internet and social media.

South African Fishing Flies: an anthology of milestone patterns will have you hooked, whether you’re a professional fly-fisher, a novice or somewhere in between. It’s a valuable addition to the South African piscatorial panopaly. Don’t let this one get away.  It may even tempt you to start a new hobby.

*Alan Hobson, a professional fly-fishing from Somerset East which borders on the Karoo says you can indulge in some fly-fishing on the Garden Route at the Outeniqua Trout Lodge; catch some bass at Lake Pleasant and if you prefer salt water fish such as Grunter, Leervis and Garrick, Nature’s Valley and the Knysna Lagoon are the places to set up your tackle.