Cape Town, December 13, 2017 – The use of around 45 000 single-use plastic water bottles was avoided, and 15 000 litres of drinking water was produced from non-potable water, during the recent Volvo Ocean Race stopover in Cape Town. 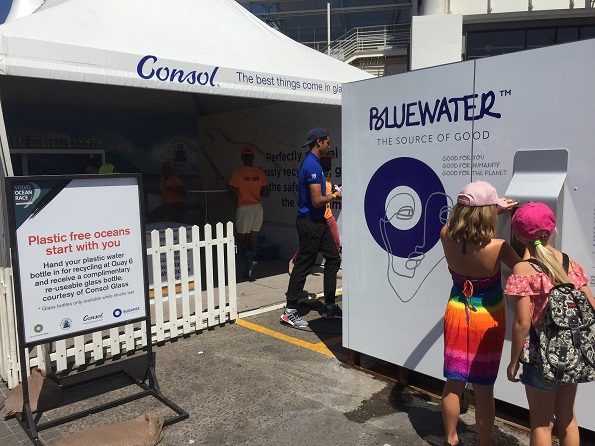 The Volvo Ocean Race (VOR), the around the world yacht race that takes place every three years, used Cape Town as one of its stopover ports, and the race village, located at the V&A Waterfront between 24 November and 10 December, showcased the race, the sailors and the yachts, to local and international visitors.

With sustainability and plastic-free oceans as one of its core messages, the VOR approached Bluewater, a world leader in innovative water purification solutions, to assist with providing clean drinking water without impacting Cape Town’s water supply, as well as to prevent the use of thousands of single-use plastic water bottles during the 17-day period.

Bluewater’s solution was to set up four hydration stations at the race village, and in partnership with the V&A Waterfront, Cape Town city authorities, 11th Hour Racing and Consol, Bluewater exchanged around 45000 plastic bottles for Consol glass ones, and provided free drinking water to the VOR village by cleaning non-potable water, thereby saving 15 000 litres of Cape Town municipal water from being used during the stopover.

The hydration stations at the race village were driven by the Bluewater Pro water purifier, using Superior Osmosis technology developed by Bluewater. This technology produces nearly 80% less waste water than is commonly associated with reverse osmosis and removes lead and most other toxic metal, chemical and organic contaminants from water sources that include borehole, grey and rain water. The Bluewater Pro water purifier can generate up to 6,912 litres of purified water every day.

“We were delighted to be able to step in and help Cape Town throughout the Volvo Ocean Race visit, saving precious municipal water during the current water crisis. Making the most of our precious water reserves while also helping to remove the need for single-use plastic bottles, is our mission at Bluewater, and it’s been a huge pleasure working with the Cape Town civic authorities, Volvo Ocean Race, 11th Hour Racing and other partners like Consol to make this happen so successfully,” says Anders Jacobson, Co-founder and CEO of Blue AB, the holding company that owns Bluewater.

After the huge positive response to the hydration stations and seeing the need for this technology in Cape Town particularly, Bluewater is planning to launch in South Africa and Africa in 2018.