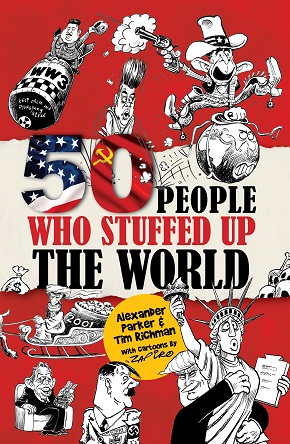 The list of the 50 people who stuffed up the world include some unlikely names. But the usual suspects are there too. The authors give cogent reasons for their inclusion although you may disagree with their choices. Apart from Idi Amin, the former Uganda dictator; Hitler, the man responsible for murdering six million Jews during World War II; Osama bin Laden; former British prime minister, Tony Blair, who sucked up to former US President George “Dubya” Bush, are also on the list; the Call Centre Drone deserves its place in the top 50 rankings. I’m sure that anyone, and that’s most of us who have ever dealt with call-centre agents, will agree.

Parker and Richman have hit the bull’s eye with their description of the call-centre drone; or agent or consultant, as they like to call (pun intended) themselves. They didn’t mention the name of the “inventor” of the call-centre. Which is a pity. So we don’t really know who to blame for that stain on human interaction. You will laugh out loud when you read the Call-Centre Drone and will identify with this line: “They know the business and they know how to fix what’s wrong. They sound like they actually care. Would you like a voucher as an indication of the company’s regret that things went wrong?”

Yea, right, as if that would ever happen.

“Dubya” was the initiator of the Iraq war and was notorious for his language gaffes: “Our enemies are innovative and resourceful, and so are we. They never stop thinking about new ways to harm our country and our people, and neither do we.” And his pal Blair is on the list because he is the most compromised politician of modern times, the authors say.

Lance Armstrong is there too because he lied and cheated his way to becoming the world’s top cyclist.

Some lesser known people include Alex Jones, ultra conservative right wing Texan talk show host, conspiracy theorist and Donald Trump’s useful idiot. Jack Dorsey, the inventor of Twitter was the harbinger of the end of rational discourse. Bill and Hillary Clinton because they are the failed standard-bearers of the political establishment; Donald Trump is the “political disrupter, a complete jackass and a reason to listen not to shout”.

Closer to home are Hendrik Verwoerd and Daniel Malan, Nazi sympathisers, white supremacists and the architects of apartheid.

The Guptas: Ajay, Atul and Rajesh, the embodiment of State Capture and for the plundering of national resources. Any mention of the Guptas must include Bell Pottinger and Victoria Geoghehan, the poster girl for amoral psycho-corporate public relations who saw no harm in fomenting racial hatred and trying to destabilise entire peoples and countries, including South Africa.

Thomas Midgley cements his place in the top 50 as the inventor of chlorofluorocarbons (CFCs) , widely used as a refrigerant, but which after his death, proved to be damaging to the ozone layer. As a General Motors employee Midgley was responsible for putting the lead into petrol to prevent engine knock. Lead, as we all know, is poisonous and some people seriously suggest it may have had a hand in the decline of the Roman Empire.

Also getting the nod is the Women’s Glossy Magazine Editor which will give you a lot of food for thought. Parker and Richman disclose the four-point formula for success which is why most women’s magazines are so similar in content and feel.
The 59 People Who Stuffed Up The World is part history, part social commentary and though you might disagree with some of the authors’ choices, it’s entertaining reading. The cartoons by Zapiro help to give the book an edgier feel.