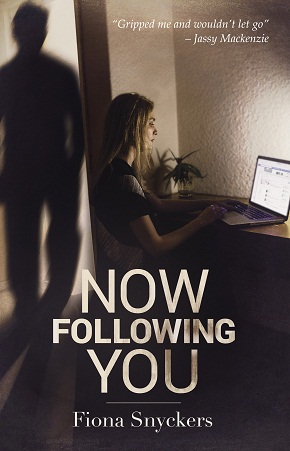 Fiona Snyckers blogs for the Mail and Guardian’s Thought Leader website and for Mail and Guardian Women and her first foray into fiction was the Trinity series of three books following the fortunes and misfortunes of a Rhodes University student, Trinity Luhabe, who partied her way through life. The trilogy made for entertaining reading. Snyckers also wrote Sisterz, a series of mobile phone novels which was commissioned by the Shuttleworth Foundation.

In Now Following You, Snyckers turns to the world of social media, where everybody’s life is an open book.

Jemima (Jamie) Burchell is a digital fanatic and has two sisters, Ella, a dancer, and Catherine, a doctor, and she lives in her parents’ house in Johannesburg after they retired to Umhlanga in KwaZulu-Natal.

She posts about everything in her life. On Twitter, Facebook and Instagram and everyone knows where she is. The only thing she hasn’t done, but give her time, is post a picture of herself on the toilet. Jamie has dreams of becoming a writer, and she writes a few chapters on her blog every day, and the story is gaining traction and more followers every day. But she’s still hoping that a publisher will take note. Jamie, who worked in the hospitality industry, owns Delucia’s Bakery and Coffee Shop with an old schoolfriend Pumla Maseko. Business is booming.

One morning Jamie sees a toddler, Ben, running in the street outside her suburban home and rescues him. Ben, it later emerges,  is the adopted son of her neighbour, Afro-American Tom Elliot, who grew up in South Africa. And so begins a tempestuous relationship. Of course, Jamie can’t resist and tells the world about her neighbour and how she thinks the way to his heart is through Ben.  But Tom has a lot of issues.

Meanwhile Jamie subscribes to a blog monitoring service and notices that the traffic is spiking. Someone is paying attention to her and not in a nice way.  Foully Wooing Won is a cyber stalker and Jamie is his target. He knows her every move because she tells the world through her social media posts. Foully Wooing Won is a nasty piece of work: he leaves disembowelled rats, birds and dogs tied to her gatepost. And he’s also visited Delucia’s Bakery a few times, but always in disguise. Naturally, Jamie begins to blog about her stalker and her followers can’t get enough of reading about it. Then things take a turn for the worse when Foully Wooing Won starts threatening the people closest to her including Pumla who is now pregnant with twins. Jamie is debating about going offline. But she’s addicted and anyway,  it’s too late. The stalker knows her every move and notes that she and Pumla will be stocktaking at the coffee shop and bakery and that’s when he makes his move. To give away more of the plot would be a spoiler. However, Now Following You is well written and it is a cleverly crafted thriller focusing on a story as topical as today’s headlines. It is also a warning about the dangers inherent in social media. All social media should come with a warning, “use at your own risk”.  The book, the first in a planned trilogy, was longlisted for the Sunday Times Literary Award in 2016 and deservedly so.