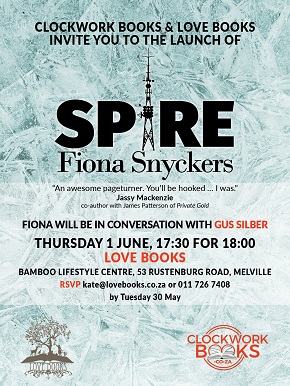 Spire is the second in the trilogy featuring the Burchell sisters. However, there doesn’t seem to be a connection except that the protagonist in Spire is Catherine Burchell, a surgeon and virologist, who was mentioned briefly in Now Following You, where the only thing we were told is that she is a doctor. The other sister Ella is a dancer and I surmise the third book will be about her.

Caroline has been posted to a remote research station in Antarctica by the South Pole Research Establishment (SPIRE), where she is studying how viruses survive in cold environments.

While she is talking to her daughter, Sharma, on Skype, Kelebile Chuma, senior nurse, trained paramedic and ICU sister, and the only other South African at the base, signals to her to cut the conversation as there is an emergency.  Spire staffer, Dr Abramovitch, who was admitted to the sick bay after presenting with an Upper Respiratory Tract Infection, for monitoring, is in respiratory distress.  All attempts to save him fail; the next to fall ill is Kelebile who also dies. And so do all the other members of the team who succumb to a variety of diseases including Ebola, smallpox, the plague and even bird flu, all the viruses Caroline brought with her in sealed containers. But somehow they managed to escape, or did they? And cause havoc. The only communication Caroline has with the outside world is through Skype and by satellite phone, when the connections are good. She does speak to her family occasionally, her daughter Sharma, who is being cared for by dad, Sharif September, from whom Caroline is separated.

Soon Caroline realises she is not alone, someone appears to be stalking her, shades of Now Following You. However, the stalker appears to be a mass murderer judging by the number of people, 50, on the base who have fallen like ninepins. To make things worse the people who run Spire, especially Ayesha King, don’t seem to be too interested in Caroline’s predicament and suspect that she murdered the base’s staffers to further some bizarre experiment she is conducting as part of her research. And she will have to wait until the beginning of the Antarctic summer before they send in the cavalry, including Interpol, that Caroline hopes will clear her name.

Then she discovers that she is pregnant which is something else she has to cope with, apart from the mad stalker.

I don’t want to give away too much of the plot; but she does have a mysterious ally at Spire who gives her advice on how to single-handedly run the base. There’s also a cat , she names Charka, that keeps her company during the long, long winter. Even in this remote part of the planet Caroline manages to locate a group of Eco Warriors lurking in the dark web, whom she believes can help her to identify the killer.  Luckily she doesn’t have to suffer the vagaries of Telkom to get connected and stay connected. Although the plot is far-fetched and stretches the bounds of credulity it is a page-turner and you have to keep reading just to find out how Caroline manages to keep the base running, give birth to a healthy child and expose the killer. In my view it is not as good as good as the first book and lacks the tension, and touches of wry humour that Now Following You did. Still,  it’s great escapist reading to while away a Sunday afternoon at home or on the beach.