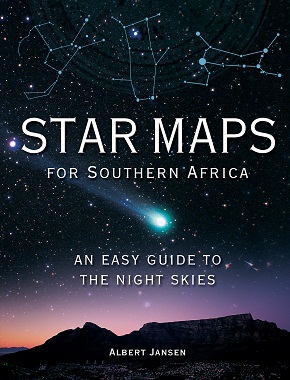 An Easy Guide To The Night Skies

The late Professor Albert Jansen who was born in the Netherlands became fascinated by astronomy when he was nine. After high school he obtained an MSc in astronomy at Leiden University and he managed the Planetarium at The Hague for several years and taught physics and computer programming at various Dutch Technikons.  In 1995 he and his wife Ellie emigrated to South Africa, where they established a private observatory in Prince Albert which drew many visitors.

Star Maps For Southern Africa is the first of its kind in the southern hemisphere and you can view the stars with the naked eye, standard binoculars or a small telescope. There are 96 full page star maps, unlike other guides which usually show the whole sky at a certain moment. Star Maps is drawn to a generous scale. There are 12 sets of eight maps and each set applies to a number of different months, depending on the month and the time you are stargazing.

The professor has distilled what in reality is a complicated subject into language that is easily accessible. There is almost no scientific jargon except for the names of the stars. The book is easy to navigate with simple explanations including sky orientation; new moon tables; equipment you will need for stargazing and even how to use binoculars. There is a checklist of the brightest stars including the Sun and the constellations into which they fall.

The Sun looks so big because it is extremely near to earth compared to other stars. Its rays reach us in just eight minutes, while light rays from other stars travel many years before they can be seen.  The Moon is not shown on the star maps because its position differs from day to day. The Planets are also not shown because like earth they constantly orbit the Sun and their positions change from month to month and from year to year.

Each set of maps has a guided tour of the sky. Set 1, for example, shows January at 9pm, but you can also use it for December at 11pm, November at 1am, October at 3am and September at 5am.

Before you start your stargazing you will have to let your eyes adjust to the light and ideally be far from the city lights and the headlamps of passing cars that can distort your vision.

Once you buy this book you can keep it for a lifetime as the stars are in the same position: in August at 9pm you will always see Corona Australis and Sagittarius rising and in different positions and settings but they will always be in that position in August at 9pm. There is a list of planetaria and observatories as well as astronomy societies with phone numbers and websites.