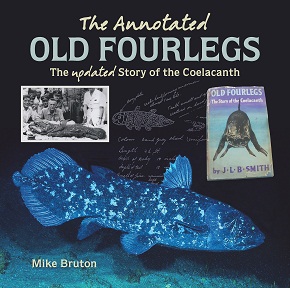 The updated story of the Coelacanth

This fishy story, the discovery of the coelacanth, also known as Fourlegs, put South Africa on the world’s scientific map and brought fame to ichthyologist Professor JLB Smith who positively identified the 400-million-year-old fish which until its discovery by the curator of the East London Museum, Marjorie Courtenay-Latimer (later Dr), was thought to be extinct. The coelacanth was brought to her by Harry Goosen, captain of the steam trawler, Nerine, who recalled that when he saw the strange specimen he told the crew, “not to damage the fish”.  Incidentally,  his son, Peter Goosen, who died in November 2003 was a respected journalist, and later he became known to thousands of Argus readers as “Weatherman Pete”. He continued to forecast the weather for the newspaper after he retired to Napier, near Caledon, in the Western Cape.

There have been 15 editions of the Old Fourlegs by JLB Smith as well as an audio book and the story has been translated into several languages as diverse as Japanese, Russian, Dutch and Afrikaans. The latest edition by Mike Bruton is based on the Annotated Alice – Lewis Carrol by Martin Gardner published in 1965. While Alice’s Adventures in Wonderland and Through the Looking Glass are fairy tales, Old Fourlegs is a riveting scientific story brought to life again by Professor Mike Bruton. The Annotated Old Fourlegs includes a facsimile reprint of the original LBJ Smith book with added notes and images in the margins that add to the interest the book. The side notes and commentaries make for interesting reading; “Wealthy yacht owners have often provided invaluable assistance to marine researchers. In 2009 Hans Fricke continued his research on the coelacanth off the Grand Comore in My Octopus, the motorised yacht owned by Paul Allen, the co-founder of Microsoft”… Another commentary reads:  “A third coelacanth was caught off Mustamudu in Anjouan on September 26 (1953) and reached Jacques Millot in Paris via the Scientific Research Institute in Antanarivo, Madagascar”.

“The coelacanth’s skull is very unusual. No other living animal (and only a few extinct frogs) have the ability both to lower the lower jaw and lift the upper jaw in order to create a wide gape”, reads another side text.

In the final chapter, The Significance of the Coelacanth, Bruton explains why it is so important. Some reasons include its natural history, enormous longevity, it is the ultimate survivor and it is a superb window in to the past. One of the spin-offs as a result of the discovery of the fossil fish was that it changed the course of South African ichthyology. It persuaded Smith to abandon chemistry in favour of fish studies and to establish a Research Department of Ichthyology at Rhodes University.

The coelacanth has also played a role in diplomatic affairs between countries. Dead Coelacanths have been donated, with due pomp and ceremony, as goodwill gifts by the Comorian and French governments to an assortment of benefactors, businessmen and politicians. However, there have been some diplomatic hiccups. In 1980 President Ahmed Abdallah of the Comoros sent a specimen to a construction company in Japan but it was confiscated by Japanese customs because of an inappropriate export permit. In another incident, a specimen was hijacked by Tokyo customs officials and is now on display at Customs House in East Kyoto Minato-ku.

Believe it or not the coelacanth, in my view, not the most beautiful fish by any stretch of the imagination, has proved an inspiration for artists, potters, printmakers, stamp designers and poets. It was depicted on South Africa’s silver 10c piece. A group of Grahamstown crafters also made a coelacanth from used tea bags.

The annotated version of Old Fourlegs is a fascinating look at the coelacanth but the story is not yet complete. No doubt there will be more discoveries in connection with the coelacanth which will give us a glimpse in to the distant past.

As Bruton writes: “The coelacanth, as a symbol of marine conservation, is a symbol of hope, in a sometimes bleak world.  JLB Smith and Dr Courtenay-Latimer would have been proud of Mike Bruton and what he has done to bring honour to Old Fourlegs.