With 24 awards and 80 nominations (the most recent being Oscar nominations for Best Film Editing, Best Supporting Actress and Best Actress), under its belt, I, Tonya –featuring Margot Robbie (About Time, The Wolf of Wall Street, Focus, The Legend of Tarzan, Suicide Squad) and Allison Janney (The West Wing, Mom, American Beauty, Juno) – will hit the South African cinema circuit on 16 February 2018. 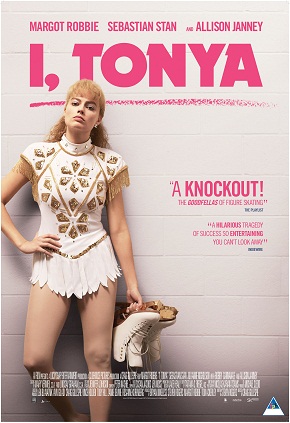 Two triple axels, various ice skating records and all the technique in the world, mean absolutely nothing when overshadowed by one of the most sensational scandals of all time.  This award-winning film – including a Golden Globe for Best Supporting Actress in a Motion Picture (Allison Janney), Critics’ Choice Movie Awards for Best Supporting Actress (Allison Janney) and Best Actress in a Comedy (Margot Robbie) and a Screen Actors Guild Award for Outstanding Performance by a Female Actor in a Supporting Role (Allison Janney) – is based on the true events behind this spectacle and will keep you glued to your seat until the very end.

Ambitious and goal-driven from an early age, former figure skating champion, Tonya Harding (Robbie) was well on her way to becoming one of the world’s biggest ice skating legends.

Her first big breakthrough came in 1991, when she won (with her first triple axel) theU.S. Championships and was awarded the event’s first 6.0 ever given to a single female skater for technical merit. At the 1991 World Championships, she again completed the triple axel (becoming the first American woman to perform it at an international event), but finished second to Kristi Yamaguchi. Unfortunately, that is not what she is remembered for. Her dreams and career were shattered by her alleged association with an infamous, ill-conceived, and even more poorly executed attack on fellow Olympic competitor, Nancy Kerrigan (Caitlin Carver), by her ex-husband (Sebastian Stan) and bodyguard (Paul Walter Hauser).

I, TONYA is a darkly comedic drama, written by Steven Rogers (Hope Floats, Stepmom), that tells the tale of a talented sports star whose success is destroyed by her troubled childhood, her mother’s abuse and her stormy relationships.  Although it initially seems like the movie is actually a comedic spoof of the heartlessness of a tabloid driven nation, you soon realise that it is about more than meets the eye.

This gripping film, directed by Craig Gillespie (Lars and the Real Girl, Fright Night), has not yet been released in South Africa but has already received various nominations from film festivals across the globe, including Best Feature Film and Best Actress at the Gotham Awards in November 2017, as well as Best Female Lead, Best Supporting Femaleand Best Editing (Tatiana S. Riegel) by the Independent Spirit Awards taking place in March 2018.  Allison Janney, who portrays the role of Tonya’s heartless and abusive mother – LaVona Golden – has also won an Award for Best Supporting Actress at theHollywood Film Awards.

The film also boasts an excellent cast and has already received a lot of praise for outstanding performances by the lead characters. Margot Robbie is commended for her soulful portrayal of Tonya Harding in this fascinating story, while Sebastian Stan can be seen in the role of her ex-husband, Jeff Gillooly. This handsome actor, from New York, previously featured in several television shows, such as Law and Order and Gossip Girl, and also starred in the Captain America Franchise, Riki and the Flash, The Martian and many more.

I, TONYA promises to captivate audiences, not only because of outstanding acting and direction, but also because it proves the innocence of a woman who was judged by the world and abused by those who were supposed to love her most.

“This movie returns Tonya to being what she always was: a great skater, and a human being with a dream of downscale flash that wouldn’t quit until it was pried away from her by the world,” says Variety’s Owen Gleiberman.

The movie is distributed by Ster-Kinekor Entertainment and will be released at the following cinemas on 16 February 2018: