Radisson Blu Hotel Waterfront takes its turn to host a life-sized, brilliantly imagined rhino on its premises in Granger Bay until the end of February 2018. 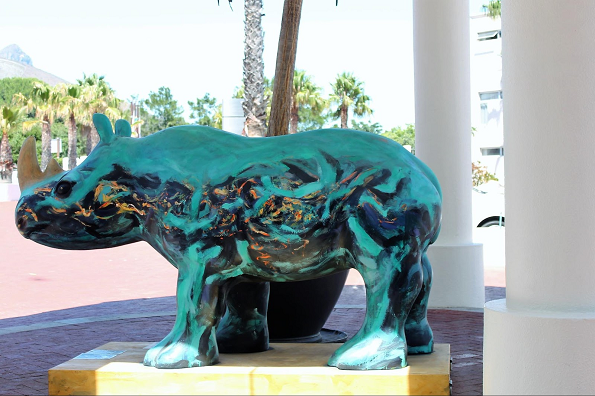 Created by South African artists, the display runs across Cape Town during the summer of 2018 as a herd of 100 or more Rhinos stampede through the historic streets of Cape Town. Life-size brilliantly imagined Rhinos are enchanting both locals and visitors alike.

The initiative is an attempt to ensure a safer future for African Rhinos, which are being killed at the rate of three per day by poachers.

A number of Cape Town hotels, businesses and individuals are involved in showcasing the rhino herd.

GM of Radisson Blu Hotel Waterfront, Debra Sivertsen commented, “Our mission is to assist in raising awareness for the plight of our rhinos by taking part in this popular outdoor Art Exhibition, we hope to help secure a safer future for our Rhino’s.” She added, “We will also be running a great competition; ‘Take a selfie with Radisson Blu Rhino’, which will involve guests and visitors to become actively involved.”

Participants are asked to take a selfie with the Radisson Blu Rhino’ and use the hashtag #RadissonRhino; tag them in on Facebook (@Radissonblucpt ) or Instagram (@Radissonblu_waterfront) and stand a chance to win lunch for 2 people at Tobago’s Restaurant and Terrace valued at R600 (excl. drinks – T&C apply). The winners draw will take place on 20 February 2018 and guests have until the end of April to redeem the prize.