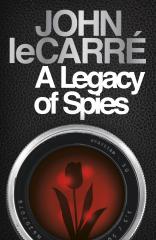 John le Carre (aka David Cornwell) goes back to his roots and the book, The Spy Who Came in From the Cold, which was published in 1963, and established le Carre as the eminence grise of spy chillers. As with all his fiction his stories are intelligently crafted and well-written, although some of them could be hard to read like Tinker, Tailor, Soldier, Spy when the master himself, George Smiley, unearths a traitor in British intelligence.

Fast forward to 50 years later one of the cases comes back to haunt Peter Guillam, a former protégé of the spymaster, is retired and living at his farmstead, Le s Deux Eglises, near Lorient,  France, with his young housekeeper, Catherine, now his lover.  In his younger days Guillam had a reputation as a “ladies man”.  One morning the postman, Monsieur Denis dubbed le General because of his resemblance to former president Charles de Gaulle brings him a letter from the Circus, his old firm formerly the Office, summonsing him to London.  The letter, written by legal adviser A “Bunny” Butterfield  is quite vague really but there is a reference to an operation that Guillam was involved in and could have serious repercussions.

The connection to the Spy Who Came in From the cold is Alex Leamas who was a double agent and infiltrated the Stasi, the dreaded East German secret police for the Circus. The only person who can shed light on the matter is Smiley who seems to have disappeared and it seems that Guillam will have to take the blame for the failure of the so-called Operation Windfall when Leamas died.

Now Leamas’s son, Christof, is suing Guillam, because he can’t find Smiley, as are the children of two other agents who featured in The Spy Who Came in From the Cold.  There are two threads to the story: Leamas’s failed operation and Guillam studying musty old documents looking for evidence that will help him evade the consequences of that long-ago operation.

Although le Carre (Cornwell) is 85 he hasn’t lost his magic touch. A Legacy of Spies is a masterpiece of espionage writing and it may be his best yet.