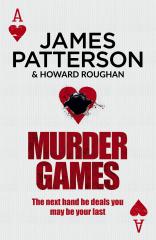 Psychologist Dr Dylan Reinhart a lecturer at Yale is an expert on the criminal mind and he has the credentials to prove it including a book.

Reinhart is a new character created by Patterson and his co-writer Roughan. The police call on the psychologist to help track a murderer who leaves a playing card with a clue that links the victim to the next target. Also because the killer is using Reinhart’s book as a template. Reinhart teams up with New York Police Department’s homicide detective, Elizabeth Needham, to find the killer who has been dubbed the Dealer.

The narrator of the story is Reinhart and it seems that he has a past with the CIA. In a sub-plot, Reinhart and his partner, Tracy, are planning to adopt a baby from South Africa and are waiting for a representative from the adoption agency to interview them at home. But to their great disappointment the agent gives them the thumbs down. Meanwhile Reinhart and Needham have a killer to catch. And as the hours tick by so does the body count mount up and it seems that the Dealer is always a step ahead. Someone else who seems to know a lot about the killer is ace crime reporter, Allen Grimes, who has been chosen as the Dealer’s messenger. There are 52 cards in a deck and Reinhart and Needham have to catch the Dealer before he plays the last one and each card is a clue that points to the next victim. However, it’s like working out a cryptic crossword. Muddying the waters is a copycat killing carried out by a vicious gang and the only witness is a young boy. The dead man is heroin addict Colton Lange, a star baseball player for the Yankees. And he is murdered when he tries to make a buy in Harlem.

Reinhart and Needham arrest the Dealer and at the 13th hour Reinhart prevents a disaster when mayor Richard Deacon is scheduled to throw the first ball at the opening of the baseball season. The action is fast and furious and the dialogue is crisp and punchy; there are twists and turns galore until the connections between the victims become clear. It’s about the money, dirty politicians and dirtier judges.  Patterson’s trademark style: short chapters with crisp and punchy dialogue and high speed chases, keep the tension ratcheting up. Adding interest is a hacker that points Needham and Reinhart in the right direction. There are some wry touches of humour to lighten the mood. Although it’s a standalone Patterson and Roughan have developed some memorable characters and a new protagonist, which I’m sure, marks the beginning of a new series.