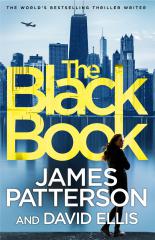 The black book in the title refers to the names of very important people who frequented an upscale brothel on Chicago’s Gold Coast and it disappeared during a raid that homicide detective Billy Harney initiated when he and his partner Kate Fenton followed a murder suspect to the unassuming brownstone. Much to their astonishment one of the men seen entering the brothel is Archbishop Michael Phelan followed shortly afterwards by the mayor, Frances Delaney. Which is when Harney contacts his boss Lieutenant  “Wiz” Wizniewski who advises him against conducting the raid because of the political fallout, not to mention the effect it could have on their careers.

But police work is in Harney’s blood; his twin sister Patti is a cop and their father, Daniel, is Chief of Detectives and he raids the brothel but there is no sign of the black book anywhere and the madam, Ramona Dillavou who makes the infamous madam Heidi Fleiss look like a school teacher, denies its existence.  After the big bust everybody including Wiz is taking credit for the successful operation. At the Rockwell bar where the cops gather and where Harney has earned a reputation as a stand-up comic his “rabbi’ Mike Goldberger, who works for the department of internal affairs, congratulates him on a job well done. Soon afterwards Harney is accused of killing his partner Kate Fenton and assistant state attorney, but he can’t remember anything as he gets shot in the head and his life hangs by a thread. The plot has so many twists and turns that it won’t be a spoiler if I reveal that Billy was working undercover for his rabbi.  The action moves rapidly from the past to the present and the dialogue is crisp and sharp. Patterson who is well known for his Alex Cross novels and hundreds of others that he has written on his own or with other authors has thrown everything in to The Black Book: corrupt cops; internal affairs investigations; protection rackets and more.  The Black Book has read me written all over it, and it wouldn’t surprise me to see it adapted for the big screen or television.