Lizandra Winter and well-known artist Joshua na die Reën have come a long way!  Before releasing her self-titled solo album in 2017, Lizandra had already been touring with Joshua. 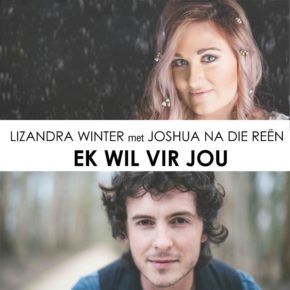 They have built a close friendship and their voices compliment each other in a remarkable way.  These two talented singers, who are also incredible musicians, have teamed up to create a beautiful rendition of the Christa Steyn hit, Ek Wil Vir Jou.

Listen here to the track:

“While I was on tour with Jacques (Joshua) in 2015, we spoke about legends in the music industry and about how their songs are an important part of the history of Afrikaans music.  Ek Wil Vir Jou was without a doubt one of my favourite songs and that I would like to cover it one day.  When I was working on my solo album in 2016, I told Jacques that I would really love to tackle this song as a duet with him.  He was very excited about the idea,” says Lizandra excitedly.

“We initially wanted to go in a different direction with the production, but each time we came back to a more ballad, classic feel.  Jacque’s piano and harmonising really made the song unique and gave it new life and I think that Christa Steyn would have been proud of what we did with her song.  What a privilege it was to be able to sing this legend’s song,” she adds.

Jacques comments: “This opportunity to be a part of the production of Lizandra’s debut album was a growing and learning process for me and one that I have taken with the utmost respect and gratitude.  To be able to do the duet with her is a privilege, not because I consider her to be one of the most talented people I know, but because I know how much heart she puts behind all her writing and her songs.”

“I want for you… Do we not all want to make life a better place for each other?  Christa Steyn, your words and melody resonate with so much passion through our lives.  I hope that from wherever you hear this song, that it meets your approval.  With love from myself and Lizandra.” – Joshua na die Reën

Douw Steyn, son of the late Christa Steyn,  says: “I want to congratulate Joshua and Lizandra on their interpretation of Ek Wil Vir Jou.  It gives me great joy that they made this song their own, without changing the soul of the original song.  I’m amazed how they added colour to this song.  The production, simplicity, of the piano is really striking.  Apart from the fact that they both have beautiful voices, this song works because it’s such an honest interpretation.  My mother would’ve been crazy about it.”