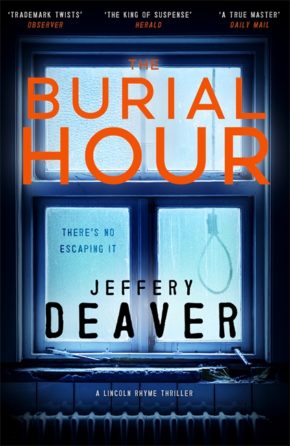 Lincoln Rhyme, the former homicide detective who works as a forensic consultant for the New York Police Department after he became a quadriplegic during a freak accident made his debut in the Bone Collector. Although he is bedridden it doesn’t stop him from bringing killers to justice. His partner, Detective Amelia Sachs, walks the crime grid and Rhyme uses all his forensic skills and hi-tech equipment to find the evidence required to get his man. Rhyme seldom leaves his New York home but this time, overcoming the logistic nightmare to transport his wheelchair and gadgetry he is in Naples, Italy, where he and Sachs are on the trail of a man known as The Composer, who kidnaps his victims and records their last gasps as part of a danse macabre.

The Composer also leaves behind his calling card, a hangman’s noose made of animal gut that is commonly used in musical instruments.  The Composer’s first victim is a business executive and the kidnapping is witnessed by an eight-year-old girl who found the noose at the scene.

That’s the cue to call in Rhyme and Sachs. After Sachs walks the now contaminated grid Rhyme finds a piece of paper which turns out to be a currency exchange receipt which tells him the Composer is planning to leave the country. When the Composer abducts a traveller at an out-of-the-way bus stop near Naples and leaves his calling card, Rhyme, Sachs and the forensic expert’s no-nonsense aide head for Italy and they join forces with an Italian investigating team, Inspector Massimo Rossi and Dante Spiro, a prosecutor who has the same powers as the police. But Spiro and Rhyme, as acerbic as each other, don’t quite see eye-to-eye. Deaver’s usual characters are left behind in New York but he has created a new one in Ercole “Hercules” Benelli, a Forestry officer whose only crime experience is arresting poachers and farmers who pass off inferior truffle imports as the genuine delicacy. While they’re hunting for the killer,  Rhymes and his team get a request from Charlotte McKenzie, an attorney with the US State Department to help an American college student in Naples who has been arrested for rape. The connection seems unlikely but leave it to Jeffrey Deaver to tie everything up in a neat package. However, nothing is what it seems and the hunt for the Composer takes the reader on completely unexpected paths. The White Boards which are a feature of all Rhyme thrillers are as usual a mine of information but the interminable lists do slow the action, even though they form a vital part of the investigation.

Deaver fans will enjoy The Burial Hour and if you haven’t read any other Rhyme thrillers then this is a good place to start.