DECA definitely needs no introduction. This instrumental music group has managed to win over thousands of music enthusiast with their strikingly beautiful arrangements over the past year and is now ready to enter the next exciting chapter of their career. 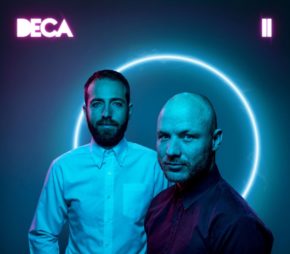 The duo’s fresh, modern and passionate renditions of crowd favourites is the key ingredient behind their instant success and resonates with audiences of all ages. II, the pair’s second album, has just been released and promises to build on this winning trend. “The new album has a nice electronic sound. Our goal has always been to put a smile on people’s faces and if our music can add a little rhythm to their daily lives, we are happy,” says the group. “Almost the entire repertoire is aimed to get listeners on their feet. However, it is not specifically a dance album, but has a very contemporary, modern and euphoric vibe.”

II consists of 13 easy-listening tracks in typical DECA fashion, which includes covers of various existing hits, such as Shape of You, Despacito and Kiss. There are also three original offerings, Irish Festival, St Paddy’s Jig and Oorwin, which will definitely impress the public. The latter was recorded with Len Muller and is also the first single that will be released from the new CD. “Oorwin was written by Douw Steyn and William de Bruin, who is also co-producer of the album. William went through severe depression in 2017 and the song was inspired by the fact that there is light at the end of the tunnel. We hope that it will appeal to anyone going through a difficult time,” the musicians said. “As an instrumental group, it is often a struggle to get play listed on the radio and we therefore decided to collaborate with Len on this song.”

They are also very excited about Timber/Oukraalliejide Mashup and believe that it has the potential to be a big hit. “We wanted to do something risky and different. There are not many mashups of international pop songs and Afrikaans hits around, and we are excited to see the public’s response. It’s always better to try new things,” they explain. “Douw also recently bought a mandolin, called Mandy, so aside from guitar and violin sounds, listeners can also look forward to some new texture. We also experimented with a voice part here and there.”

According to them, the biggest challenge during the recording of the album was to meet their deadlines. “We are so busy with performances that it was difficult to get everything done in time. The other challenge, for any artist, is creativity. It’s not something that can be forced and if something does not want to flow on the day, you have to try again tomorrow. But that’s a good challenge.”

The group has also recently completed another exciting projected. Themes & Love Songs, which is currently available on iTunes and concerts, is dedicated to all of their loyal fans and is a combination of crowd favourites and requests they have had over the past few years. It is a collection of soothing instrumental renditions of well-known love songs like From This Moment and Toe Vind Ek Jou, as well as movie and television themes like Game Of Thrones. This release is the perfect choice for background music at weddings and corporate functions.

Herman Steyn (on the violin) and Douw Steyn (on the guitar) are veterans in the music industry, with more than 26 years of combined experience between them. They met in 2014. Together with William de Bruin they started Son Records, a recording label, in 2015. Working closely together they started to enjoy performing and decided to create an album for themselves. What started out as a project to keep their creativity flowing, ended up becoming something much more and DECA was born. The group has since shared the stage with renowned artists and performed at various functions, launches and parties, including Aardklop.

Their debut album, Black Sails, was released in 2017 and was very well received. The video of the titular track has already had more than 30 000 hits on YouTube and the album has nearly reached gold status. “The album is a combination of instrumental, pop, folk and Irish sounds. The violin is the main focus, strongly supported by the acoustic guitar,” they shared. “The CD is a mixture of up-tempo and slow soothing tracks. It includes original compositions (Picnic, Black Sails, Finnigan and Skylights), as well as some popular covers (Thousand Years, Love Me Like You Do, etc.).”

DECA would like to reach all demographics of the country with their music and also plan on submitting their songs to international radio stations. “We do not only have one specific target market and want to reach everyone in one way or another, regardless of race, gender, religion or sexual orientation. We also busk at shopping centers across the country, to cater for those fans who do not necessarily have the means to attend festivals and concerts.” They have a great admiration for artists like Lindsey Stirling, Piano Guys and Die Heuwels Fantasties and would like to work with Joshua na die Reën one day.

THE TALENT BEHIND THE MUSIC

Both artists are passionate about music and enjoy a variety of genres. Douw, who inherited his love for music from his mother (Christa Steyn), did not always dream of becoming a musician. His interest only started during his student years at North-West University where he obtained a BCom degree in Business Management. “I started out helping my mother with her recordings and thirteen years later, I am still working in the music industry. I miss the times we spent together in the studio,” he says. The guitarist also completed a music course in France, under the guidance of Grammy winner Chris Lord-Alge in 2014. His brainchild – Afrikaans Herlaai – received three Ghoema Award nominations in 2015.

Herman studied Music at the University of Stellenbosch, after which he joined the popular group, DNA Strings. Two years later he was off to South Korea to work at an educational English Theatre as musical director. After returning to South Africa, he worked with Add Life Productions on several successful musicals, including The Buddy Holly Story, Ester die Musical and Dawid die Musical. SHERAAZ, a five piece instrumental group founded by him in 2012, was nominated for a Ghoema Award in 2014 for Best Instrumental Album. “If I had to choose any other career, I would have liked to be a filmmaker. I love the film industry and film as a medium. I was busy with my master’s degree in Film Music when I joined DNA Strings,” he shares.

DECA’s debut album is refreshingly different and hopefully a good indication of the musical masterpieces that can be expected of them in the future. The past year has taught the musicians not to have too many expectations when it comes to the music industry, because it is very unpredictable. That is why they poured their heart and soul into their second CD. “The recording process took six months and we wanted to take our time to ensure that the end-product is something we could be proud of. We tried to find the right balance between what the public wants to hear and what we, as musicians, enjoy,” said the duo.

The thirteen carefully selected tracks, will not only capture the hearts of audiences, but will also invite them to sing and dance along. If you are not a fan yet, the group’s latest offering will most definitely win you over.