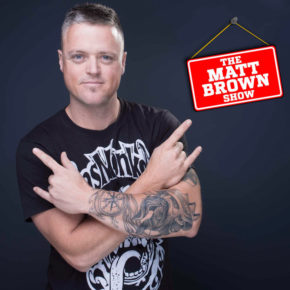 The Matt Brown Show has built a listenership and captive audience in over 100 countries around the world. #CryptoJHB was the first podcast event to trend in the #1 hashtag position on Twitter in the history of South African media.

CNBC Africa broadcasted a section of The Matt Brown Show, through their programme #CryptoTrader, Hosted by Ran Neu-Ner. The Matt Brown Show tapped into Martins’ deep insight into the cryptocurrency landscape and interrogated issues such as the move from Bitcoin to alternative cryptocurrency (altcoins), the Initial Coin Offering (ICO) frenzy, how he makes his investment decisions and anonymity coins.

Matt Brown says Martin is known for his uncanny ability to read the cryptocurrency market. “Luke has more than 100,000 followers on Twitter. I strongly advise anyone who is serious about cryptocurrency trading to follow him if they are not doing so already.”

Discussing the move from Bitcoin to altcoin, Martin said investor psychology is an important consideration, especially the psychology of people getting into crypto trading late. “Various coins that have been hailed as ‘the next Bitcoin’ attract investors looking for a cheaper coin that will allow them to earn a higher multiple.”

Martin says while the ICO frenzy – where some tokens launch at 50 or 100 times their money – might be a bubble, it might not necessarily be a bad thing. “Good things can emerge from it. The massive fundraising is going to back projects that will disrupt other industries. Of course, we will continue to see corrections of 30%, 40%, 50% or even greater. After all, we’re dealing with a hyper-volatile asset here.”

Looking at the bigger picture, Martin believes the total market cap is going to continue to go up. “Looking at where gold is – at $6-trillion – we are only at about $800 billion. So, relatively speaking, we are still pretty small.”

Talking about how he makes investment decisions, Martin says he thinks of everything in macro terms. “Where a lot of guys dive into projects and wonder if they should invest this or that coin, I go onto the website and do my homework. I like to think of things in terms of the entire market. I also think of them in terms of sectors. Notably, three sectors I am most interested in investing in are: smart contract platforms or protocols (the infrastructure for the cryptocurrency space); privacy coins; and decentralised exchanges.

“Once I have a sector picked out – let’s say decentralised exchanges – I look at it closely. I like to establish who the biggest players are and who have the most potential, healthiest projects and strongest teams (incidentally, I think it’s ZeroX – they have the most activity going on in their ecosystem). And then, maybe I look smaller. If I’m looking to take a larger risk, I may look at a coin that has a smaller market cap, such as Kyber.

Asked to elucidate on the difference between decentralised exchanges and bitfinex or bifinance, Martin says the greatest difference is the level of security. “Right now, exchanges are a centralised point of failure for the entire system. The appeal of cryptocurrency is you are your own bank.

“When you keep your Bitcoin on one of these exchanges and the exchange goes under or gets hacked, all your cryptocurrency is gone. A centralised exchange allows you to connect via a centralised system and exchange tokens in that way. Your money is never tied up in an exchange – it’s always in your own wallet or a smart contract.”

Martin is bullish about ZeroX, which was recently listed on Bitfinex, getting a high valuation. “There are so many different projects being built on top of ZeroX. It has a really healthy ecosystem of teams already adopting that protocol.

“Most decentralised models have more than one development team working on it. My advice is to evaluate the strength of the development team that is building around something like ZeroX, check their activity on Twitter and their community. It’s important to see there is ongoing communication.

On anonymity coins, Martin says some believe the block chain in its current format is anonymous. “This is not really the case – it’s halfway anonymous in the sense that your name attached to your bank account. However, all the tokens are traceable. Understandably, most corporations don’t want their bank account credit online. Also, some organisations have amazing trading terms and they don’t want their competitors to see when they pay the money or how much they get paid.”

Martin’s top three anonymity coins are Monero (which has the largest network; is a truly decentralised project; and doesn’t rely on a single developer, ZCash (which is a bit more risky); and ZClassic. Investors need to be aware there are a lot of Z’s when it comes to privacy coins, but they are not the same,” he says.

When asked how staking coins works, Martin says if investors hold their coins in a wallet, they are pretty much earning interest in the form of more coins. “So, if you’re holding 1 000 ZCoins and you are running a ZNode, you are paid every time a block is found.

In Neu-Ner’s words: “They are making the assumption that if you own the coins, you belong to the network and are therefore a contributor to it. You are rewarded with an ‘interest’ payment, or a dividend related to what the network is making.”

The conversation turns to interoperability challenges. “Interoperability is a kind of decentralised exchange combining a few different things. We’ve already seen network congestion happen with Bitcoin and Etherium, amongst others. These chains aren’t able to interact with each other yet. It would be huge if they could, but right now there is not conversion metric that can take you from the lite network into the Bitcoin network or from the Bitcoin network into the Etherium network.

For people looking to invest in ICOs, Martin recommends an objective, systematic approach that follows some set of rules. “A friend of mine pioneered a technique of putting the ICOs onto a spreadsheet and breaking them up into categories such as team and qualitative, token metrics, market cap and total supply, amongst others. The next step is to score them before making a decision.”

One recommendation Martin gives to everyone is to split their positions between trades and investments. “Whether they choose to hold two separate portfolios is up to them, but knowing the time horizon that they want to be a particular position is important. With something like ZClassic, the time horizon is really just to hold until the fork. ZRX, on the other hand, is a decentralised exchange where they may want to be positioned and could therefore be regarded an investment.”

A final word of advice from Matt Brown is: “If you understand this space and know how to make great trading decisions, it can really change your life. Attending conferences such as these and following leaders in the cryptocurrency arena can help inform your trading and investment decisions.”