It is easy to understand why ADAM is so popular in the Afrikaans entertainment industry. 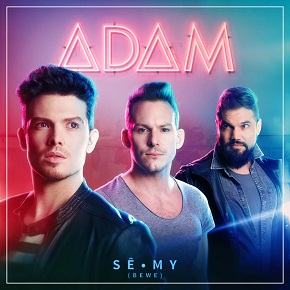 This musical trio, consisting of Hugo Ludik, Reynardt Hugo and Kyle Grant, has the unique ability to soulfully combine beautiful lyrics and captivating melodies with their distinctively unique style and deliver it to listeners in perfect harmony. Their new special deluxe double album will hit the shelves in April this year and will improve on the winning recipe that made them famous.

The song is a cheeky dance track, and will be the first single to be released from their new album. The song was inspired by Hugo’s failed attempts to get a girlfriend and especially to meet a nice girl at a bar. “The single is tongue-in-cheek and fun to perform. It is the first time that we have a song that is both playful and humorous and we are very excited about it,” shares Hugo. It was a team effort by Reynardt, Hugo and Vaughan Gardiner and is about those corny pick-up lines that men use so often. “It is a catchy tune that everyone will be able to relate to and has the potential to be a hit,” Reynardt says. A music video of the song will also be available soon.

The new special deluxe edition will include a copy of their previous highly successful album, Hoogtevrees, which was released in August 2016, as well as ten brand new offerings. The latter is a mixture of upbeat dance tracks, heartfelt ballads and new renditions of old crowd favourites. The latest batch of original songs were written by Hugo Ludik, Reynardt Hugo, Vaughan Gardiner and Nerine Gardiner. It also features a duet, Kalmeer, with Kyle’s wife which promises to satisfy even the most critical of ears.

If you switch on your radio today chances are good you will hear the new single!