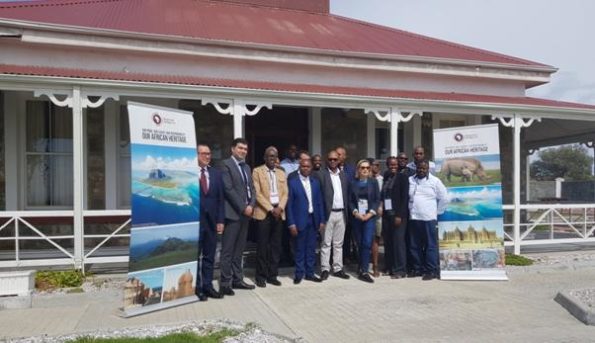 This important meeting started on Sunday, 11 February and is set to run until Wednesday, 14 February 2018 on Robben Island.  Delegates who are participating in this C2C meeting included Advisory Bodies (IUCN, ICCROM, ICOMOS) and World Heritage Centers from Bahrain, Brazil, China, Mexico, Spain and South Africa. The Director General of the Department of Arts and Culture, Mr. Vusimuzi Mkhize was also in attendance and gave a keynote address.

The C2C meeting, organised in partnership with the African World Heritage Fund (AWHF), saw an assembly of the UNESCO World Heritage organisations discussing strategies to conserve and protect World Heritage sites, such as Robben Island. The purpose of this meeting was to critically reflect on the work of UNESCO (United Nations Educational, Scientific and Cultural organization) and to address aspects of nature conservation and protecting cultural properties.

Welcoming the C2C delegates Mr Mava Dada acknowledged the role the C2C are playing in the implementation of the World Heritage Convention in various regions, and in the context of Africa, AWHF which is partnering with Robben Island Museum on many fronts. Highlighting the state of conservation of Robben Island, Mr Dada presented the success and challenges, including the progress towards developing the next Integrated Management Plan. He further indicated that “Last year we celebrated our 20-year anniversary as a museum, and next year we will celebrate our 20-year anniversary as a World Heritage site”. He also shared that “We are celebrating 100 years of the late Nelson Mandela, an icon of democracy, who spent 18 years at Robben Island maximum security prison”. This meeting is the first event on the Island in this year of celebrating the legacy of Nelson Mandela,” adds Dada.

Mr. Joseph King from International Centre for the Study of the Preservation and Restoration of Cultural Property (ICCROM), a World Heritage Advisory body and participant in the C2C meeting added, “I would like to use your management plan as an example at other heritage sites around the world. It’s time we learn lessons from Africa and take those lessons to other regions of the world to showcase the positive developments that are taking place here,” says King, referring to RIM’s 2nd Integrated Conservation Management Plan.

In his keynote address, the Chairperson of AWHF, Mr. Vusumuzi Mkhize encouraged the participants to discuss “the overarching issue of how to balance heritage conservation and development issues as a shared concern and an area to further reflect on”. Mr Mkhize further implored C2C to “bring unanimity and more understanding on issues relating to World Heritage and sustainable development in the various regions”. He requested the meeting to have “frank and robust debate on sites, such as the genocide sites in Rwanda, which are dear to them and Africa to avoid imposition and facilitate general consensus in implementing the World Heritage Convention”.

The programme will go on to include panel discussions to share experiences of natural and cultural heritage protection and how to adopt United Nation’s Sustainable Development Goals (SDG’s) at World Heritage sites. Participants will end off the event with a visit to Table Mountain, which is also a part of the Cape Floral Region Protected Areas World Heritage Site.

“I would like to thank AWHF for the work they have done for World Heritage sites in Africa, we are one of their many beneficiaries and we hope that this partnership will continue to grow from strength to strength,” concludes Dada in his welcoming address.

For more information on the African World Heritage Fund, visit their website: https://awhf.net

Robben Island Museum (RIM) is a public entity responsible for managing, maintaining, presenting, developing and marketing Robben Island as a national estate and World Heritage Site. It was established by the Department of Arts and Culture in 1997.

RIM is also responsible for managing and maintaining the assets of the Island. These include the Maximum and Medium Security Prison Complexes, Robert Sobukwe’s House, the Curio and Village Shops, the Village Precinct and associated recreational facilities, the Helipad and runway on the Island, World War 2 memorials, power generation and water processing plants, Jetty 1 and the Nelson Mandela Gateway at the V & A Waterfront, the Mayibuye Archives, the three (3) ferries that transport people to the Island and the fleet of buses used by tourists on the Island.