Ian, a well-known guesthouse owner and food fundi comes up against the skills of three women. He pulls out all the stops and even brings in his alter ego, Lady Scarlett, to vow them.

The first three series have been huge ratings hits and in 2013 the programme won a Best International Format Show Award at the 7th Annual South African Film and Television Awards 2013 (SAFTAs).

After a three-year hiatus, the hugely popular primetime show is set to be as entertaining as ever, as each week four complete strangers attempt to wine, dine and outwit each other to be crowned SA’s best dinner party host.

Episode one takes place in Pretoria and serves up the perfect mix of hilarious kitchen drama, shocking guests and delicious entertainment.

Of course South Africa’s capital city is bureaucratic, staid, boring and conservative – just look at Come Dine with Me’s hosts – a pole dancer, an amateur dramatic, someone called Philipine-who-is-not-an-Island, and a verbal fast-forward called Nohlanhla! Hold onto your hats as confessions, interrogations, suspicions and laughter abound! And never mind the pole dancing – who is Lady Scarlet? And why does she have a beard?

Pole dancer Carmi is up first, prepping as she couches pole dancing as innocent as it is an industry! Hyper-critical Phillipine (did someone call her Phillipain?) hunts and finds fault with most of the dinner party. There’s a Thai Green Curry, there’s homemade ice-cream and fudge, but that’s about as far as the down-home feel gets, because there’s that ever-calling, shiny, sleek pole! Let’s just say some inhibitions took flight and left through the window.

A night of claws revealed, barely-concealed criticisms and wanting hosting sees Phillipine’s night start with a mild etiquette put-down from our host to the effect that cutlery settings require one to eat from the inside out. Witness steak knives for Salmon, fish knives for lamb. But it wasn’t all downhill from there – peace broke out over shooters. Ironically!

The bubbly, talkative Nohlanhla hosts night four and from the prawn starters to the panacotta and berry compote dessert, it’s a lively, hilarious evening, with a critical and now beardless Ian never short of a quip or a dagger. The host was backwards and forwards, Carmi laughed from beginning to end and even Phillipine was an island no longer.

Throughout the entertaining episode the ratings swing to and fro like a seesaw and the undercurrents make you wonder who will be the winner.

What an outcome, what a blast!

Be sure not to miss tonight’s first episode of this highly entertaining series. 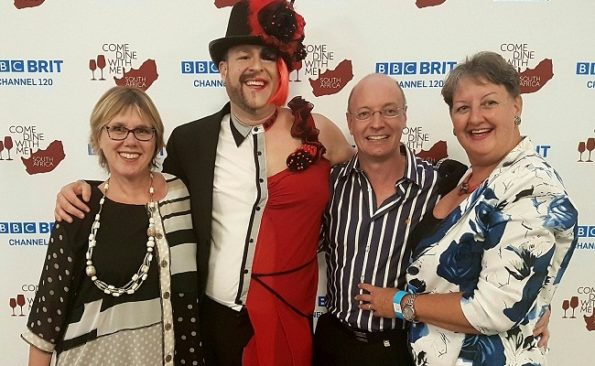