Multi-Instrumental Folk-Pop Duo Bottomless Coffee Band has steadily been making waves in the SA Music Industry and fans will be delighted with the news that their second full length album   “Anthelia” is due for release in February 2018. 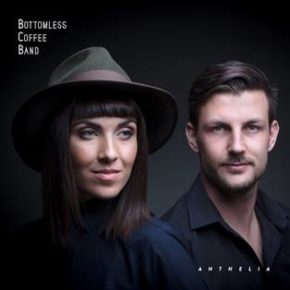 The band takes a more flavored turn with this new offering and the album consists of 11 brand new tracks. Lourens and Esté Rabé of BCB says that the aim was to make a diverse album, while maintaining the ethos of the band. They have carefully conjured up songs that stay true to their aim to “create a feel-good vibe with a strong message”. It includes gutsy social political songs with unique local flavor, crowd-favorite power ballads and goose-bump love songs. The sound is a combination of folk-pop and rock with hints of classical tones. They have even included one or two surprises for Afrikaans fans.  This album will make you dance, smile, cry and sing along, all in the song-journey of one couples experience of life.

The duo was formed as two students at Stellenbosch University. After completion of their studies, they both went into full time corporate careers – Lourens an Investment Analyst in the Asset Management industry whilst Esté headed up a corporate theatre company.

They have played an average of 150 shows per year since the release of their debut album “Room With A View” in 2015. The successful release lead to the couple both leaving their corporate careers to “take the leap of faith” and build a career in full-time music. Lourens excitedly proclaims: “This was a dream come true for both of us … there was great freedom in trading what the world labels as ‘success and security’ for a life of pursuing your passion and dream… We realised that significance means more to us than security.” Esté adds: “Since the beginning our main goal has been to inspire others through music. In a world filled with so much brokenness and mindlessness, we want to make music that would give hope, inspire change, spread love and unite people.”

They embarked on numerous tours reaching as far as Namibia, Belgium, The Netherlands and the UK. Esté explains: “I think the international tour played the role of catalyst in getting us to start work on the new album. How could it not? We experienced things worth documenting and the inspiration became more and more apparent with every step we took.”

As any musician knows, inspiration is not the only ingredient in the recipe to make a full-fledged album.

The next step was to find a producer and a studio. Lourens, with a reminiscent look in his eye, remembers their original idea: “When the time came around to start on the new album we were also looking to move in to a new house, so the idea came about to build a home studio and create this beautiful narrative around the recording process. We however quickly realized that this was easier said than done, and after a conversation with a certain record breaking local artist, we made contact with Bellville Studios headed by the legendary, Theo Crous, who agreed to work with us.”

“We could not have asked for better. Working with Theo Crous was a phenomenal experience for us and we managed to complete the album over the course of 6 months” adds Esté. “Although the essence of BCB is still prevalent in the new material, the songs have taken a more mature turn. When we wrote our first album we were a just-married couple, young and fresh out of University. Now it’s been 3 years and we have learnt a lot about the industry and most importantly about ourselves as artists and songwriters. It seems only natural that the sound developed into something more complex.  We are really excited about this new release.”

The name, “Anthelia”, is inspired by the title track that captures the essence of what the album has to say.  It means: “The ability to see angels”.  The duo translates this into their own interpretation: “The ability to see beauty in everything and everyone around us.”

Bottomless Coffee Band released a video of the first single off the album on 12 December 2017.  The single, titled ‘Broken System’, will also be submitted to SA Radio Stations in January 2018. Link to view the video here: https://www.youtube.com/watch?v=n_74KTj1Nbo

“Anthelia” pre-order on iTunes is live – for release on 16 February:

Anthelia will also be available in all good music shops

Bottomless Coffee Band will also be performing at Woordfees in Stellenbosch on March 8th and KKNK, Oudtshoorn April 1st and 2nd. More tour dates to be announced soon.