The Pillars of the Earth

A Column of Fire

Ken Follett has a string of best-sellers to his name including Eye of the Needle, Code to Zero and Whiteout, to name a few. Then he turned his hand to doorstopper blockbusters,  the first of which was the Century Trilogy: Fall of Giants, Winter of the World and Edge of Eternity which followed the fortunes over 3 000 pages of five connected families— American, Russian, German, English and Welsh —through the most dramatic events of the 20th century. 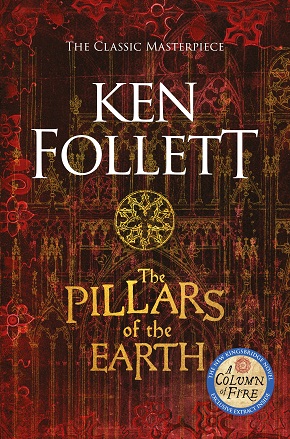 Pillars of the Earth covers the period 1123 to 1174. The story focuses on Philip, the Prior of Kingsbridge whose dream is to build the greatest cathedral the world has ever known; of the builder, Tom and the wild but elusive and beautiful Lady Aliena. It is a classic tale of ambition and anarchy set against the background of 12th Century England. It starts with a public hanging and these occasions are usually cause for celebration. However, this one was different, as the thief was a stranger, accused of stealing a jewelled chalice from a monastery 20 miles away, and nobody knew who he was. When the thief’s neck snapped, a beautiful girl with hypnotic yellow-brown eyes cursed the three strangers, a knight, a monk and a priest, who brought the thief to the gallows, would come back to haunt them many years later.  The focus of Pillars of the Earth is  on the building of a cathedral in Kingsbridge and the people who contributed to it. Set in 12th Century England, Pillars of the Earth is a sweeping, historical novel featuring some extraordinary good characters: Tom Builder; Jack the best stone carver for miles around and the love of his life Aliena, who swears an oath to her dying father to restore the earldom to his son and her brother Richard, Then there are the bad guys: the vengeful Alfred, who is jealous of his stepbrother Jack; the holier than thou priest, Remegius and William the Earl of Hamleigh, whose ambition far exceeds his brain power. And on top of it he’s a bully. 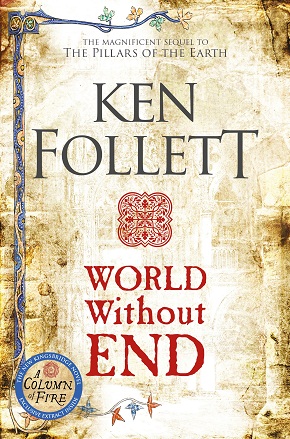 World Without End starts in 1327 and follows the lives of some of the descendants who featured in the Pillars of the Earth, and takes you through the harrowing events of the 13th Century: the Black Death that took the lives of thousands and revolutionised medical thinking. On the day after Halloween four children Gwenda, a thief through necessity, Caris, who wants to be a doctor,  Merthin, boy genius , later builder supreme and his brother, Ralph, a bully who can’t get over the fact that his father Sir Gerald and his wife, have been reduced to penury, and are living as “pensioners” under the patronage of the monks in the monastery at Kingsbridge.  Ralph has a cruel streak and his ambition is become a knight and fight for king and country, hoping to be elevated to the earldom.

While the four children are playing in the forest they see two men killed, and another man who is severely wounded buries a document under a tree and swears Merthin to secrecy. The letter could have serious repercussions. Meanwhile Jack goes in search of the father he never knew, a pilgrimage which takes him across Europe. The thread throughout the story is the love Merthin and Caris have for each other, even when she becomes a nun. 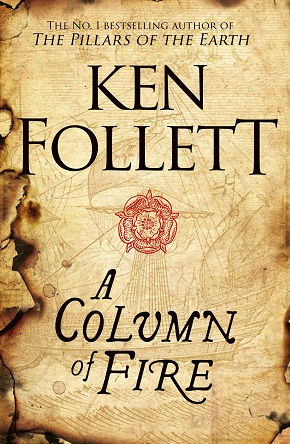 A Column of Fire features Ned Willard who is all for religious tolerance. After setting up the secret service for the Queen, he spends his life tracking down murderers, mainly Catholics, who have no love for Protestants. But the men that stand in his way include Rollo, an extreme Catholic and Pierre Armand who are determined to see Catholicism prevail. Armand will do anything to further his cause: lie, cheat and murder, but using others to do the killing. A Column of Fire includes many historic incidents: the Massacre of St Bart’s in Paris, the Gunpowder Plot initiated by Guy Fawkes and which was foiled at the 11th hour. It takes the reader through the rule of Bloody Mary, the Catholic queen who burned thousands of heretics (Protestants), at the stake. When Mary died prematurely, her Protestant half-sister Elizabeth,  promised a more tolerant attitude toward religion. Then Pope Pius V excommunicated Elizabeth and those who supported her, deepening the hatred between the Catholics and the Protestants across Europe.  There are numerous threads and characters to the story but they all meld seamlessly in to one another.

The three books can be read as standalones although they are connected through the various characters. A Column of Fire is sweeping in its scope and has all the ingredients that make a novel great: unrequited love, sex; treachery and more. The three books consist of  3087 pages and World Without End has 415 000 words. Each book is a gripping read but some might think the detail too much. But it would be an injustice to leave them off your must-read list.