The King protea (Protea cynaroides) is South Africa’s national flower. It has several colour forms and horticulturists have recognized 81 garden varieties. The Garden Route National Park (GRNP) is home to several kinds of King proteas and recently welcomed a special kind to its Regional offices on Thesen Island (Knysna). 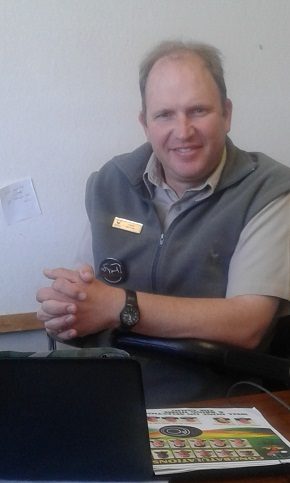 Chris Patton is the newest addition to the SANParks family in the Garden Route and while he brings a unique skills set to the team, he is also a national asset.

Patton was one of only 136 athletes chosen by the South African Sports Confederation and Olympic Committee (SASCOC) to represent South Africa in the Commonwealth games in Australia. The games are in April (04-15th April 2018) but the first stop for Patton and teammates will be in Johannesburg where all athletes will gather to dine with the President among other activities planned for the 25thMarch 2018. They will then depart for the Commonwealth games on the 27th March 2018. ‘This will give us a week to adapt to local conditions’ says Patton.

True to the nature of King proteas, Paton is just as calm and focused. He says he is not nervous about his debut to International games for SA and tackles his long to-do list daily leading to the team’s departure to Australia. Proteas grow well under a harsh environment especially under dry, hot summers and or wet, cold winters.   In 2014, the bowling team was among the gold winners who put SA on the map. Patton will be taking up a jersey for that same team.

His journey to selection is just as intriguing as his explanation of how the game works. He started the game back in 2001 in a bowling club in Pretoria and 10 years later was spurred on by someone who encouraged him to start competing. He took up the offer by competing in what he calls ‘bread and butter bowls’ playing against local teams in Irene (Pretoria). His eyes light up as he explains the trick to mastering the sport ‘the competitive edge in bowling lies in muscle memory and more than average practice. The bowls bend, they don’t run straight down the line.’  He adds ‘what I like about bowling teams is that athletes with disability get to play in the same team as able-bodied ones.’

Now he as a member of the Knysna bowling club, he will be flying the flag high for Knysna!

SANParks is used to the winning pattern where Chris is concerned. As far back as 2003, he put the organisation on the map by trailblazing projects with infrastructure suitable for physically challenged people. This was acknowledged by the Rob Filmer Awards.

Because Chris is an avid birder who is techno-savvy, readers can follow his postings and developments on the SANParks twitter accounts: @SANParksGRNP and @SANParks