The official trailer for the local crime thriller, NOMMER 37, produced by Gambit Films, was released today. 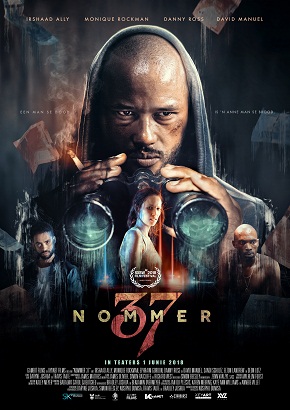 “With a title like NOMMER 37 and set in a fictional Cape Flats area, you would think that this is a film about gangsters – it’s not. What it is, is an out-and-out crime thriller that tightens the screws of tension with every minute. It’s about everything that could go wrong for a couple when depression, curiosity, greed, fear and horrific bad decision-making collide,” says director and writer Nosipho Dumisa.

Entrapped in his apartment, Randal Hendricks (Irshaad Ally – Suidooster and Four Corners), a recent paraplegic, is given a gift of binoculars by his devoted girlfriend, Pam (Monique Rockman). But he is in financial debt to Emmie (Danny Ross), a sadistic loan shark, and when he witnesses a powerful criminal, named Lawyer (David Manuel), commit murder while observing his neighbours through his binoculars, he initiates a blackmail scheme in an attempt to settle his debt. With deception and greed around every corner, what follows is a thrilling ride that puts both their lives in mortal danger… as the world around Randal deteriorates further and further into chaos.

NOMMER 37  is heading for the international big screen and is set for its World Premiere at the SXSW (South by South West) International Film Festival, in Texas, USA, during the week of 9 to 16 March 2018.  This is the very first South African feature film to receive a world premiere at SXSW as well as the first fully South African feature film to make SXSW selection.

NOMMER 37 is a thrilling big-screen cinematic experience that will keep viewers on the edge of their seats until the credits start rolling.

This Gambit Films Production was produced in association with kykNET Films, M-Net, XYZ Films and the DTI, and will be distributed by Ster Kinekor Entertainment locally, in cinemas across the country, on 1 June 2018, and by XYZ Films internationally.