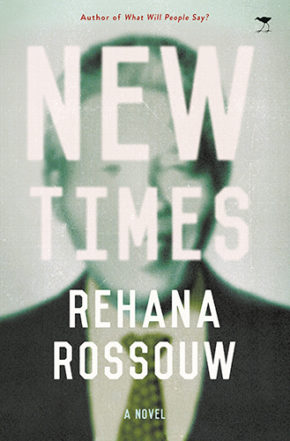 Rehanna Rossouw has a fine eye for detail and capturing the frailties, foibles and strengths of humanity, as she showed in her debut novel, What Will People Say? about life on the Cape Flats during the height of apartheid. She brings those same talents to bear in her latest offering New Times which centres on the life of a conflicted Aaliya “Ali” Adams from a devout Bo-Kaap Muslim family.

Ali who was named for the world boxing champ, Mohammed Ali, by her later father, works as the political reporter for the weekly New Times in Cape Town, at the dawning of the Rainbow Nation, which coincides with Nelson Mandela’s second year as president at the Rugby World Cup in 1995.

She worked for the Democrat, an anti-government publication which scooped many of the established media titles and it closed as a result of numerous bannings and censorship by the apartheid regime.

Ali is carrying baggage from the trauma she experienced during those turbulent years fighting for justice. She earned her stripes on the Democrat where she worked for eight years. But when it abruptly went into liquidation, she found herself unemployed. Ali who has the same true grit as the champ soon finds her stride in the new times in which she finds herself. Her stories make the front page of the New Times just as they did on the Democrat, a paper that closely resembled South and Grass Roots, which were also vehemently opposed to apartheid and its accompanying evils.  She still has contacts from the old days including LIzo from the Mass Democratic Movement, who is now an adviser to Nelson Mandela. When Lizo was released from Robben Island, he lived with the Adams family for a while and they think of him as their adopted son, especially Ali’s grandmother, who listens avidly when he talks about Madiba’s latest adventures. She also begins to take an interest in the Rugby World Cup, unlike Ali who would happily let it pass her by.

In some ways Ali was isolated from the white community but she soon gets a wake-up call when she meets Servaas the rugby-mad sports editor on the New Times, who offers to take photographs of a black female fighter pilot, who fought in the battle of Cuito Canavale where Servaas, a former SA defence force soldier lost his best friend, Kristof, in the skirmish. And Kristof’s parents, Jaap and Hendrina Van der Walt, are still seeking closure. Their story will be told at the looming Truth and Reconciliation Commission.

Meanwhile Ali is hot on the trail of a corrupt welfare minister, and the Movement is drafting a new economic policy without consulting their constituency. Throw into the mix her gay friend and activist, Munier Gamieldin, who is demanding that the government take action on Aids, and he is refusing to take his medication, unless it’s made available to everyone. To add to Ali’s distress is the fact that her best friend, Sumaya’s pending marriage, threatens the end of a secret and passionate relationship. Her depiction of the Western Cape Premier, Coen Conradie, who is trying to cover up for his corrupt minister will ring a bell with many readers.

Ali lives with her family: her grandmother, Big Mummy; her mother, Mummy, who becomes immersed in Islam after the death of her husband and Ali’s dad, who still haunts her dreams.  There are some light-hearted moments when Big Mummy, Mummy and their cousin Mymoena start a business selling her famous coconut ice hoping to cash in on the Rugby World Cup. With lots of marketing advice from Sumaya, an actuary with Old Mutual.

There’s a cameo of Ali’s meeting with Madiba at Tuynhuys when a shadow boxing match with the icon almost ends in disaster.

Rossouw has captured the times perfectly. Her description of the newsroom in the days before internet, of the news editor, Milly Smith, and political editor, Joy “who never had a story idea in her life” Van der Merwe, will resonate with journalists who still recall the days of hot metal and when you had to make carbon copies of your stories.

Rossouw also points her penetrating pen into the dark corners of the Muslim community who don’t have much tolerance for an alternative lifestyle. She writes that moffies like Munier are mostly tolerated in Bo-Kaap, but it’s different for girls (they are obsessed with controlling women’s sex lives, in all its permutations).

All the characters are fully fleshed out even those on the periphery of the story: taxi driver Boeta Ganief and Sumaya’s father; the healer Yunus , known to all as the moulana, who eventually plays a bigger role in the life of the Adams family. He gives Ali a dua, one of her favourites her from madrassah days which Yunus has adapted for her and brings her a measure of peace as does the flock of pigeons which descends on the bougainvillea in the yard where the ancient fig tree used to grow.

New Times is a beautifully written tale of the beginning of the Rainbow Nation and Rossouw draws on her experience as a journalist in those early days. Put it on your must-read list of books. And that goes for What Will People Say? too.