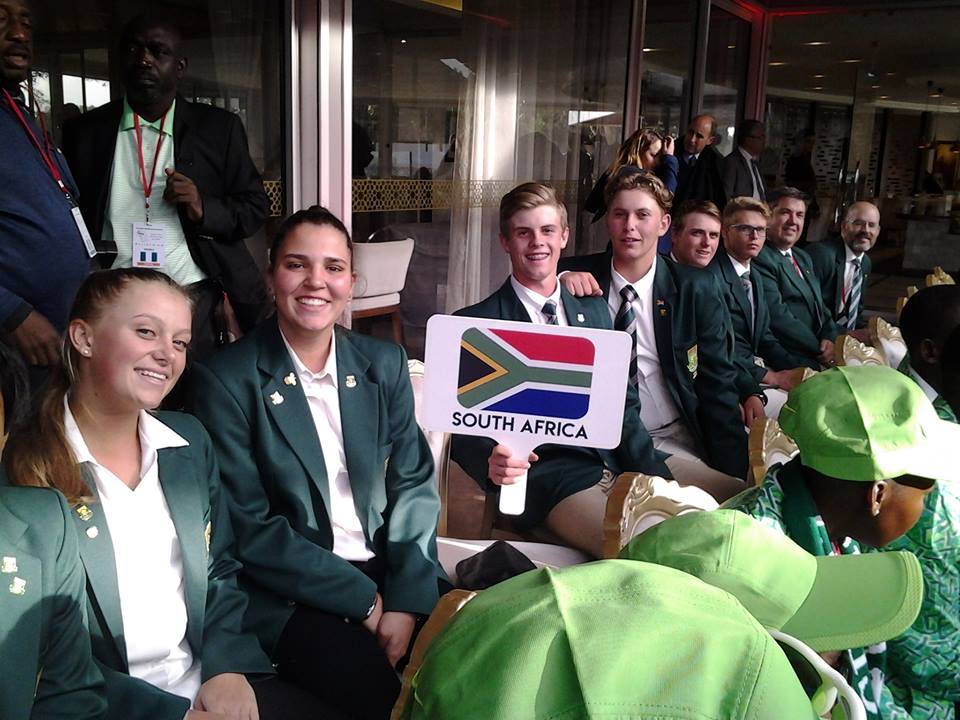 Kajal Mistry and Symone Henriques combined for a third round 157 to move South Africa to 471 in the Girls Competition. The defending champions will carry a 44 stroke lead into today’s final round.
Henriques had her heart set on a red number but battled a balky putter.

“I was striking the ball so well, but the putts just wouldn’t drop,” said the Glenvista junior. “The pin positions were actually quite nice, but conditions became quite tough when the wind came up.

“The ball flies nicely off the tee, but then the wind finds a gap through the trees and takes it offline completely. The first cut of rough was still very wet and thick and expensive. I was disappointed with my score, especially as the weather was the best we have had all week.”

Randpark’s Mistry, too, felt despondent not to dip into red numbers.

“Going off the eighth, we don’t have the easiest start, especially with 10, 11 and 12, which are probably the toughest holes on the course,” said Mistry. “I managed birdies at 18, two and seven and the highlight of my round was the chip in birdie at seven.

“I was also disappointed with my round. All three of us were keen to go low, but just couldn’t get the ball in the hole. I also left myself too many long putts.”

The third member of the team, Caitlyn Macnab, signed for a non-counting 78.

“I struggled off the tee with my shots mostly going left and I had to chip out onto the fairway too often, leaving me with difficult up-and-downs to save par,” said the Ebotse golfer. “My nemesis hole this week has been the 12th. I hit a good drive but found the rough. I punched out nicely and the ball landed in the middle of the fairway and almost rolled into the water. I hit a good shot into the green standing well below the ball, but then spoiled it with a three-putt bogey.”

The top two teams in both competitions qualify for the prestigious Toyota Junior World Cup in Japan. The South African girls’ team should qualify comfortably, however, it’s all to play for in second place. Morocco moved into second place with a third round 161 and lead Zimbabwe on two strokes with a 54-hole total of 515.

The South Africa team moved 46 strokes clear of the host union the Boys Competition and the trio also occupy the top three spots in the same order in the individual standings.

Morocco registered a third round 228 to retain second place on 696 and it would take a special effort from Kenya, sitting in third on 743, to prevent the host union from qualifying for Japan.

While the players braved the fairways, the coaches were treated to a view of the Moroccan Golf Federation’s High-Performance Centre, which is under construction close to the course.

“The Centre will cater for all aspects of golf and will be available to amateurs and professionals,” said Women’s Golf South Africa president Sally Greasley. “Every aspect has been catered for, from course management to course greenkeeping, clubhouse reception to club management, professional shopkeeping to club fitment, repairs, etc. It as a truly spectacular presentation and awe-inspiring to see where funds are being spent to grow the game of golf in Morocco.”

“In the evening all the players were treated to a trip into the centre of Rabat. It was another fascinating experience and the competitors enjoyed the King’s palace, a mausoleum, and spending a bit of money in the market. It was a very special treat for all, because so often we only see the airport, hotel and golf course.”