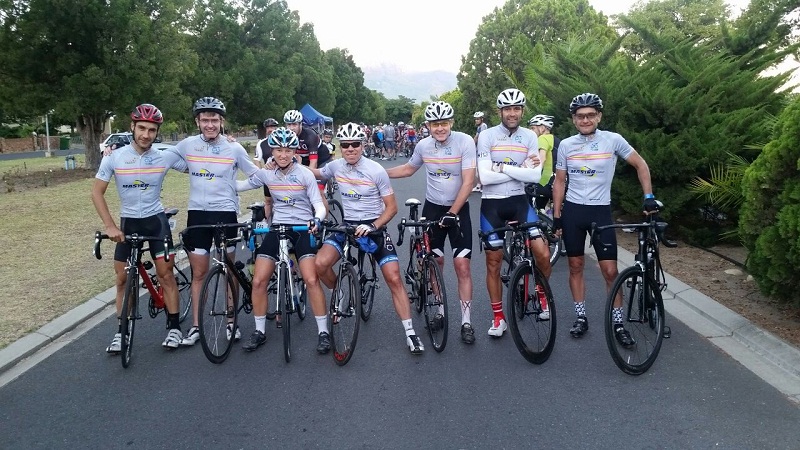 Two riders of the Pink Trees for Pauline team taking part in the Bestmed Tour of Good Hope, South Africa’s premier road race in Paarl, Dorian Wrigley and Annemie Koen will be contesting their positions on the podium this morning (Friday).

Annemie Koen (31) from Mossel Bay, one of South Africa’s up and coming women cyclists has worn the Yellow Jersey for two days and she is at present in third position in the Open Category women’s section. Koen dropped back one position on Thursday when Mariska van der Linde was just too strong on the mountain climbs and pushed her out to third position. Kelly Tome is still in the first position.

Dorian Wrigley (49), a veteran rider from Johannesburg, who won the race in the men’s open category last year, is still in third position. There are only seconds between him and the second position and Wrigley will be riding hard to secure his third position on the podium.

Koen and Wrigley together with 10 cyclists from across the country and abroad are competing to generate funds for the NPO (non profit organisation) Pink Trees for Pauline (PTfP), which operates in 115 towns in South Africa to assists patients to gain entry to cancer treatment.

The team’s top riders include Tom Briggs, Kelson da Cruz, Nick Vink and Antonio Cencherle who are all in the top 20 riders in the Open Categorie. Koen is in 30th overall position.

The riders, dressed in gear sponsored by Master Cargo, a premier transport company moving retail goods countrywide and across the borders, are riding for the awareness as well as to generate funds. With the logo Wrapped in Colour, United in Hope, Pink Trees for Pauline really tries to make a difference in the life of cancer patients.

You too can get involved by pledging a donation. Click on the link, It is so easy and by pledging any amount, you too can make it possible for Pink Trees for Pauline to make a difference in the lives of people living with cancer. The link is: https://www.givengain.com/cc/pinktreesforpauline/

The last stage of the race will begin at the Mandela Legacy and end at the Taal Monument in Paarl.