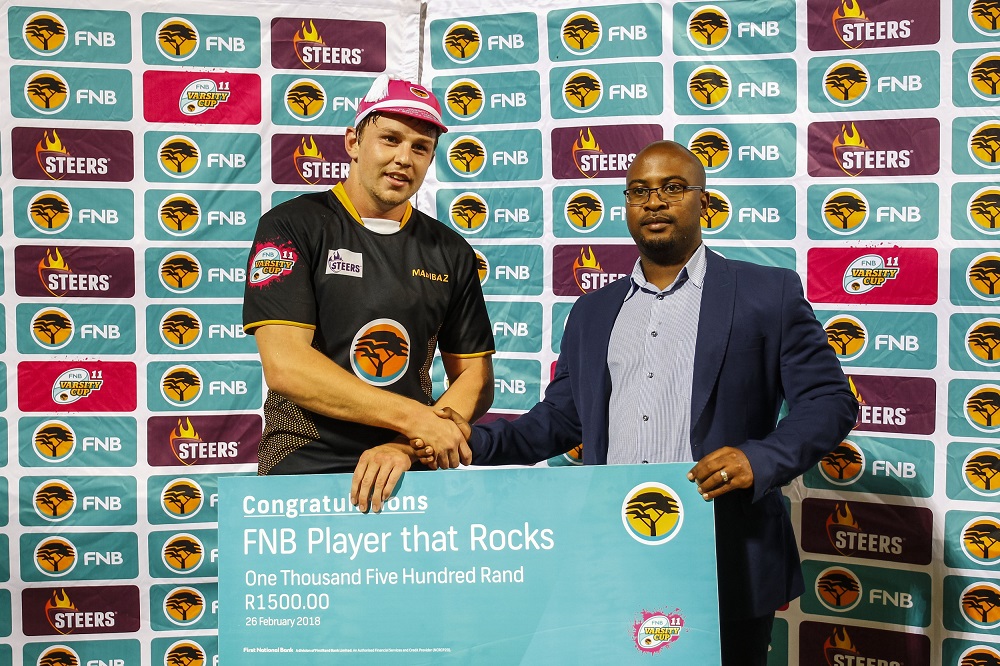 FNB Madibaz flank Brandon Brown is playing some of the best rugby of his career as he strives to make an impact on the Varsity Cup, his achievements recognised with accolades in two successive matches.

The 23-year-old economics masters student, who lives in Mangold Park in Port Elizabeth, was voted the Player that Rocks against Wits and NWU-Pukke, a notable achievement given that he was on the losing side in both games.

It is an indication of how Brown, who was christened Henry but is widely known as Brandon, is enjoying his rugby at this stage and he says his confidence has grown since he turned out for the EP Kings U21 side in 2012.

“I think my play has definitely improved over the last few years, learning how to operate in the breakdown area and to create interplay with the backs,” the former Grey High pupil said.

“I am really enjoying being given the freedom to play in the outer channels from time to time and to work with the backline players.”

Acknowledging that it was a special experience to be voted twice as the Player that Rocks, he quickly added that it was the team result that was of greater importance.

“It’s nice to be recognised like that, but it’s a pity that it came when we were on the wrong side of the scoreboard,” said Brown.

“We are focused only on getting a win for the team and it’s something we will continue to fight for.”

Madibaz have yet to record a win in this year’s competition. They have suffered some close losses, but were well beaten in Johannesburg on Monday against the high-riding University of Johannesburg outfit.

“Some of the matches early on could have gone either way, but we had a hard chat after the UJ game,” he said.

“We admitted where we went wrong and committed ourselves to fixing this in training. I must admit, this morning’s [Wednesday] session we were able to do exactly what we said we were going to do.

“We have to take the loss against UJ on the chin, but we now have three games left to prove ourselves and try to fight for what is left of the season.”

Madibaz will be at home for their next game on Monday when they take on log-leaders Stellenbosch at Madibaz Stadium at 6.30pm.

While a tough rearguard action faces the team, Brown, who has also turned out for the EP Kings senior team, is happy to be involved and injury-free after suffering a frustrating period earlier in his career.

“I was in the EP Academy at the time and fortunately Academy head Robbi Kempson placed his trust in me, kept my contract and I did all my rehab through them.

“I am grateful for the efforts of the medical staff at the Kings and Madibaz for helping me get over this period.”

Having had a taste of rugby at senior provincial level, Brown said he would like to return to that level once he finishes at varsity.

“Obviously, my focus now is just on the Varsity Cup, but I would like to progress to try to play competitions such as the SuperSport Challenge, the Currie Cup and PRO14, and possibly even Super Rugby.”