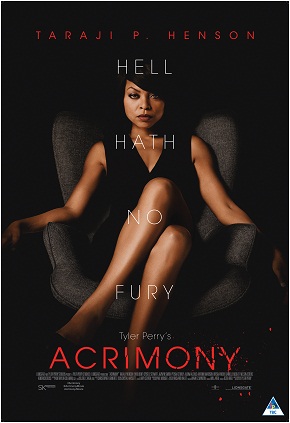 A faithful wife would do just about anything for love… even support her devious husband for years against her better judgement.

But then she expects and deserves the same kind of loyalty, because deception on his part may just push her over the edge… just like it did to Melinda (Taraji P. Henson) in this psychological suspense thriller.

ACRIMONY is American actor, comedian, scriptwriter and director, Tyler Perry’s latest offering and contains all the ingredients needed for an unforgettable blockbuster. Over the years Perry has scripted various successful stage productions, which were later adapted for the big screen. He is best-known for the character, Madea, of the Madea comedy franchise and has written, produced and directed popular films like Diary of a Mad Black Woman and Daddy’s Little Girls. Television series such as House of Payne andThe Haves and the Have Nots can also be listed as some of his greatest achievements.

Melinda, a loyal and faithful wife, is tired of standing by her devious husband, Robert (Lyriq Bent). She becomes enraged when it becomes clear to her that she has been betrayed and, because hell hath no fury like a woman scorned, decides to take revenge against the “other woman” (Crystle Stewart). The story unfolds in flashbacks during her sessions with a psychiatrist and ends up with her having to prove her ‘innocence’ in court.

This nail-biting thriller will take movie goers on a dark journey of revenge and betrayal. It will resonate with anyone who has ever been hurt, cheated on or betrayed, but will especially appeal to fans of Tyler Perry’s earlier work.

All the ladies can also look forward to the exclusive Girlfriend’s Getaway screening on 28 March 2018 at the following Ster Kinekor cinemas: