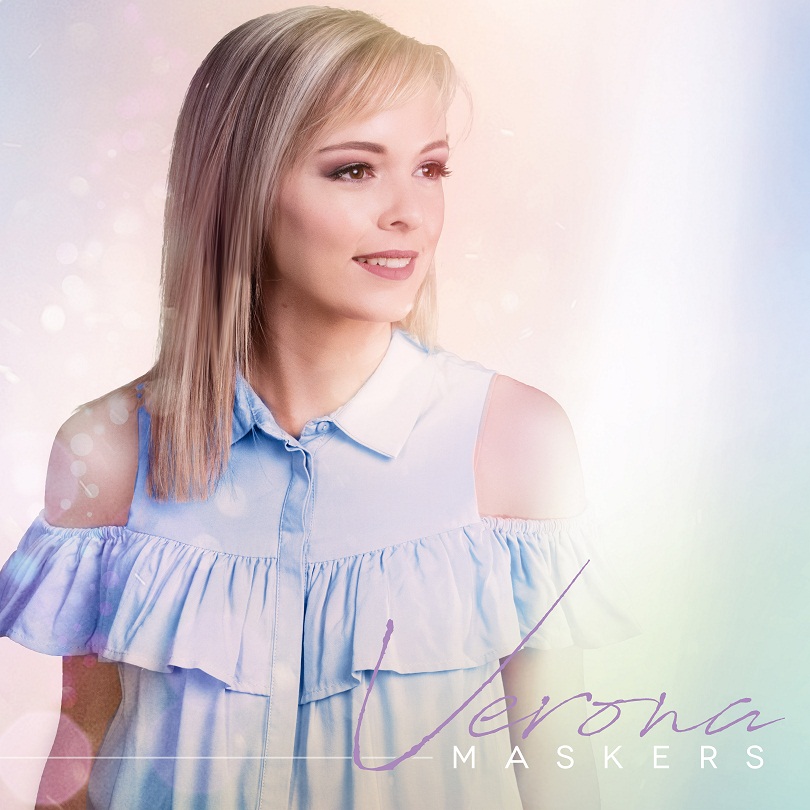 Verona, with her soothing voice, definitely needs no introduction in the entertainment industry. The small town girl from Meyerton has not only managed to establish herself as a reality show star, radio- and TV presenter over the past few years, but has also become known as a journalist, producer and singer.

Her first Afrikaans single, MASKERS (MASKS), has just been released and is already making waves amongst music lovers. The single, which is a team effort by herself and Hugo Ludik, boasts a folk-pop sound combined with meaningful lyrics and a catchy melody that is not only easy to listen to, but will also leave listeners longing for more.“The song is about the masks we wear in life. Most of us use masks to hide who we really are and to protect ourselves. We are often afraid to show our true selves and tend to hide our pain and suffering. With this single I try to inspire people to get rid of masks, because they will never learn if they continue wearing them,” she explains.

According to Verona, one of her friends was the inspiration behind this song. “I have a friend who has been working as a jester in the entertainment industry for years. He has often told me how liberating it can be to put that white paint on your face and hide behind it for an evening’s work. Nobody knows you. You lose all inhibitions and you are free. Sometimes a mask is liberating, because if nobody can see you, it’s so much easier to just be yourself. It made me think about the masks we all wear on a daily basis. There are so many different masks,” she explains. “People hide their pain, appear to be fake and put up appearances, because they cannot possibly show who they really are. We are too scared to show ourselves. Too afraid that others will not love what they see. Ironically, I realized that masks are so restrictive. If you are never able to be yourself, how will you grow or learn? It’s also very exhausting to pretend to be what you are not.”

Verona was only four when her talent was discovered. Her aunt would pick her up from school and then the two of them would sing together on their way home. Later her mother was told to send her for singing lessons. At the age of eight, Heidi Schoeman of the Theater of Performing Arts, took her under her wing and she performed her first song at the Vereeniging Arts Festival for which she received an A ++. During her school career she regularly participated in Eisteddfods, school concerts and arts festivals. She also completed her Trinity Concert Certificate. The artist was part of the South Gauteng Youth Choir, Colla Vocé, for four years. She also studied a little bit of musical theory, can play the piano and guitar and always tries to take on new challenges like learning to play the ukulele.

After school, she decided to put her singing career on hold in order to complete her studies and obtained her honours degree in journalism from North West University’s Vaal Triangle Campus. During this time she was given the opportunity to play the character, Brionay, in 7de Laan and was also the runner-up of a reality series on kykNET called Jy is My Liefling. She and her good friend, Llewellyn du Plessis, were also the producers and presenters of the ASTV series, Vir Ewig en Altyd, which mainly focused on the wedding industry. The singer also worked as co-presenter of a breakfast program on 90.6 FM Stereo, the Vaal Triangle’s local radio station. When she is not singing, she works for the magazine WILD & JAG / GAME & HUNT and also manages their social media platforms and video productions.

Laurika Rauch, Amanda Strydom, Anneli van Rooyen, Koos Kombuis and Anton Goosen are among the musicians who had an influence on Verona’s musical style. She also has great appreciation for the work of international stars such as Adele, Nora Jones, Katie Melua, Florence and the Machine, Alanis Morisette, Ellie Golding, Rachel Platten, Annie Lennox, Etta James, Ella Fitsgerald and Roberta Flack. The music industry has taught her that nothing comes for free and that you have to work hard to achieve your goals. “I hope to introduce my music to as many people as possible and to make them feel inspired. Hopefully, I will also be able to make a living from doing what I love.”

There are still a lot of musical goals that Verona would like to achieve, including her debut Afrikaans album, which she is very excited about. She would also love to work with artists like Elvis Blue, Karen Zoid, Freshly Ground, ADAM and Chris Chameleon one day and continue working in the media and television industry for as long as possible. “I hope that my debut album will be one of the highlights of my career. I have been waiting so long for this opportunity and it is truly a dream come true,” shares the talented artist.

MASKERS is a must for anyone who enjoys meaningful music. The combination of heartfelt lyrics, a fresh and unique sound and soothing voice, are the perfect ingredients for a hit that will remain popular for years to come.

Listen to a teaser of the song here: