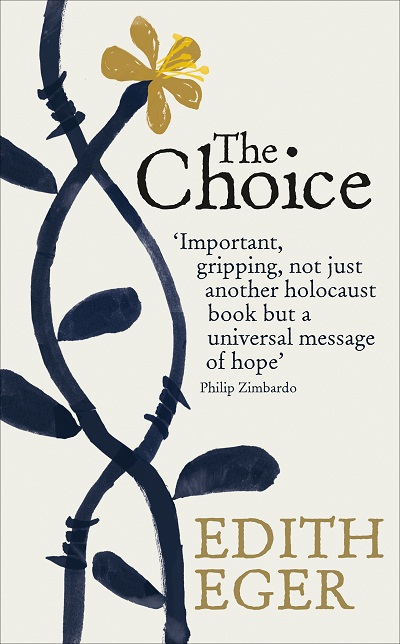 Some people have the capacity to heal themselves and dig deep into their souls to do so.

Now an eminent psychologist, Dr Edith Eger was a teenager in 1944 when she and her family were sent to Auschwitz during the Second World War and despite overwhelming obstacles she survived, along with her two sisters Magda and Klara.

Eger and her family were Hungarian Jews: her father was an accomplished tailor and her mother, a housewife, and their lives for the most part uncomplicated although her parents were conflicted because they couldn’t follow their dreams.

Unlike in other Eastern European countries such as Poland, the Jews in Hungary did not live in ghettoes, and they had plenty of opportunities, educational, professionally and culturally. Although, says Eger, Anti-Semitism was not a Nazi invention it was safer not to admit she was Jewish.

The young Klara was a more than promising musician, Magda was flirtatious, bossy and made everyone laugh; Eger (Dicuza) was a ballerina and a gymnast but their lives were shattered when she and her family were sent to Auschwitz when she was 16, after the Nazis invaded her country during the Second World War.

On arrival at Auschwitz her parents were sent to the gas chambers but she and Magda stayed together. However, Klara, who was Eger’s “second mother” was separated from the other members of her family. And it’s as a result of a small miracle that Klara learned their fate.

When the last remaining Jews in Hungary were rounded up Klara escaped detection and  lived in her professor’s house disguised as a Gentile. She was later moved to a convent 200 miles from Budapest. But when a girl from the music academy recognised her she sneaked back to Budapest on a train.

Eger remembers her mother writing a letter while they worked in the brick factory explaining where they were. When they were being evacuated from the brick factory to the concentration camp her mother dropped the letter in the street, which was found by a stranger who put a stamp on it and posted it to Klara.

The anecdote is one of many beacons of light that shone through the darkness of the Holocaust. And, as Edith writes, it was evidence that kindness in the world existed then, too.

At Auschwitz, Edith is forced to dance for the notorious Angel of Death, Dr Josef Mengele, who conducted the most gruesome medical experiments on concentration camp inmates, especially on twins and triplets.

Up until liberation when Eger was found in a pile of bodies, barely alive, her heroic actions helped Magda to survive and during the infamous death march, Eger’s bunkmates in turn saved her life.

A lesson that Dr Eger imparts is that you must forgive yourself before healing can take place. Although She was a victim and did nothing wrong she had to face up to her fears. When she danced for Mengele her inner voice told her: “This is temporary. If I survive today, tomorrow I will be free.”

However, it was a long and difficult journey before Dr Eger was finally free of all her demons. It also took a visit to Hitler’s stronghold to exorcise them. In The Choice she shares her stories of the Holocaust and the experiences of her clients ranging from soldiers suffering from post-traumatic stress disorder; survivors of abuse and people trapped in unhappy and sterile marriages.

At the heart of the book is Eger’s message; that “freedom becomes possible once we confront our suffering.”

The Choice is a story of hope and our capacity to heal. Edith was tortured, starved and threatened with death many times but she was not broken by the horrors she suffered.

Noble Peace Prize Laureate Desmond Tutu said that The Choice “reveals our capacity to transcend even the greatest of horrors and to use that suffering to the benefit of others.”

After the Holocaust Eger moved with her husband to the United States. Having worked in a factory while raising her young children, she graduated with a PhD from the University of Texas. Today she lectures round the world and helps the military to deal with their most troubling cases.

One of her mentors was Viktor Frankl who was also at Auschwitz and his book Man’s Search for Meaning is regarded as a classic. The book was given to her by a fellow student soon after she returned to school (university) and it spoke to her directly and sent her on her path of healing. She was the keynote speaker at Frankl’s 90th birthday.