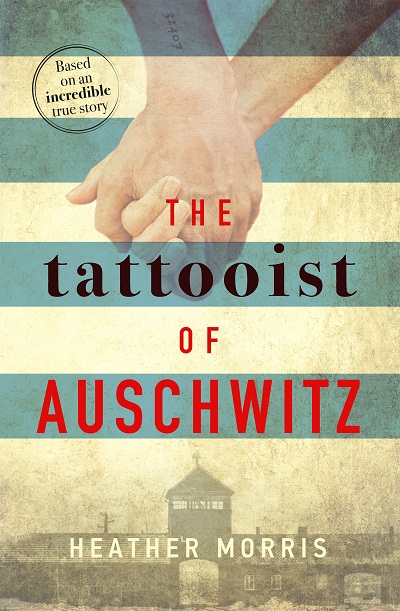 Love can blossom in the most unlikeliest places, even in the depths of depravity.

Heather Morris has written a novel based on the true story of Lale “Ludwig Eisenberg” Sokolov and Gita “Gisela Fuhrmannova” Furman, both Slovakian Jews who were taken to Auschwitz, the concentration camp in Poland, where thousands upon thousands upon thousands of Jewish people, and others, were gassed in the crematoria built by the Nazis.

One beautiful spring day Lale sees a large enclosed truck drive around the camp to park beside an bus which has been adapted into a bunker. While he watches, hundreds of naked men are herded into the bunker, some go willingly, others reluctantly, but once they’re in, the doors are slammed shut and a German officer clambers to the top with a canister in hand and upends it into a hatch in the roof and closes it. A few minutes later, the bunker bus shakes violently and there are some muffled screams. When the doors open “dead men fall out like blocks of stone.” Lale has witnessed an unspeakable act of horror. The next morning he cannot wake up;  he is gravely ill with typhus and left for dead by the SS but after much pleading, is rescued by a bunkmate.

When he regains consciousness seven or eight days later, the camp’s official tattooist, Pepan, who gave him the number, 32407, offers him a job as his assistant and Lale accepts. When Pepan disappears into the maw of the gas ovens Lale becomes the Tätowierer responsible for tattooing concentration camp numbers on newly arrived prisoners. The numbers have become the most iconic symbol of the Holocaust and were tattooed on prisoners strong enough to work and to live another day.

While working as Pepan’s assistant Lale is tattooing the number on to the arm of a young woman; he looks up and he falls instantly in love with Gita, 18, and is determined that they will both survive the Nazi death camp.

Lale’s position as the Tätowierer gives him a measure of freedom and he is able to smuggle extra food, little luxuries like chocolate, to bribe the kapos, and medicine for Gita and food, even if it is an extra crust of stale bread or small piece of sausage painstakingly cut into thin slices, that he shares with the other prisoners.

I am not going in to detail about how Lale and Gita, who refuses to tell him her surname, until the camp is finally liberated by the Russians, are reunited. You have to read the book to understand how, against insurmountable obstacles, two ordinary people became extraordinary, eventually finding each other, and happiness, after World War 2 ended.

The story of the tattooist of Auschwitz has remained untold for the past 70 years, one of the reasons being that Lale was afraid of being labelled a collaborator. But desperate times call for desperate measures and the indescribable acts of cruelty, which is too mild a term, that Lale and Gita endured, were leavened by the many acts of kindness Lale and the other inmates performed for each other. As some of the outside workers like Viktor and his son, Yuri, did for Lale. No-one could ever call him a collaborator. It is a story of hope, courage and humanity in spite of the evil that permeated the world at the time.

There are some moments of black humour when Lale is forced to procure girls for the liberators when a Jeep load of Russians pick him up after the gates opened at Auschwitz-Birkenau. Apart from Russian, Lale could also speak Czech, German, French, Hungarian and Polish fluently, and it his language skills that got him the job as a pimp. Which means that he has to go in to the nearby village each morning “to find lovely ladies to spend time with the Russians”.

The Tattooist of Auschwitz will bring a lump to your throat and tears to your eyes. But it will not leave you unmoved. At the very least it will inspire you. It is compelling reading. The Tattooist existed as a screenplay for 12 years but then became a novel.

Lale lived his life by the motto: “If you wake up in the morning, it is a good day.”

Some history is pertinent here: Lale was imprisoned in the Strafkompanie (penal unit) from June 16 to July 10 1944, where he was “tortured” by Yakub, a giant of a man, whom Lale treated with kindness when he arrived at Auschwitz. No-one was expected to survive or to be released from that unit. Lale was born on 28 October 1916 and transported to Auschwitz on 23 April 1942;  Gita was taken to Auschwitz on 13 April 1942 where she was given the number 34902 and retattooed by Lale in July when she moved from Auschwitz to Birkenau. Lale did not know that his parents, Josef and Serena Eisenberg, were murdered when they arrived at Auschwitz on 26 March 1942, while he was still in Prague. That emerged only after his death.

After liberation the couple’s life was not without incident. The Sokolovs were together for more than 60 years. They settled in Australia and ran a successful business. Gita died on 3 October 2003 and Lale on 31 October 2006. The story has been fact-checked against all documentary evidence, writer Morris noted, and with Sokolov’s son, Gary, the child they never thought they would have.

I have interviewed two Holocaust survivors at different times. One of them survived Treblinka and the other the Auschwitz-Birkenau concentration camp. Their stories left me unsettled for months afterwards. However, the reality really hit home when they showed me the blue numbers tattooed on their forearms. Ten years ago they were still clearly visible. The survivors wore their tattoos like a badge of honour, which in a way they were. After reading the Tattooist it wouldn’t surprise me if Lale had given the Auschwitz survivor his number.