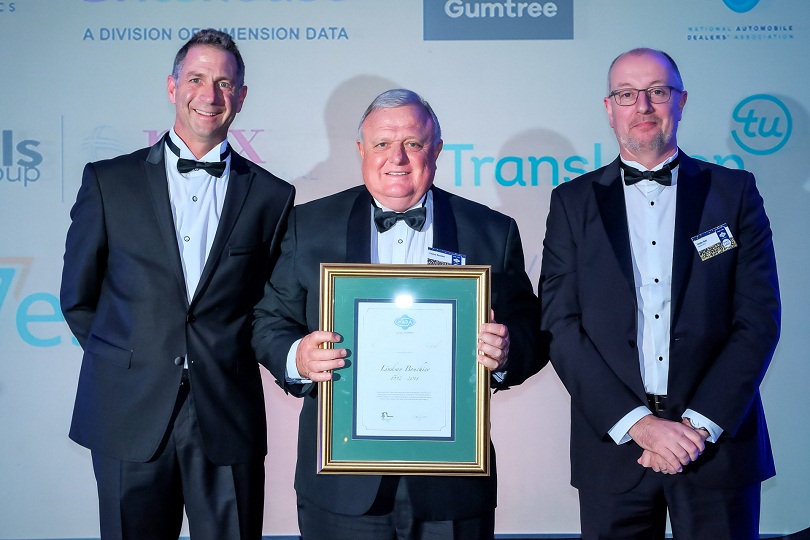 Manny da Canha is one of those people who has become a legend in his own lifetime. He is, arguably, an entrepreneurial mover and shaker without equal in the history of the South African motor industry. Just one example is that he introduced or reintroduced 18 car and motorcycle brands to the South Africa market between 1996 and 2013.

Da Canha’s impact on the local industry is summed up very well in the NADA citation covering his achievements over the past 25 years: “In recognition of his tenacious passion and relentless dedication over many years to changing and improving the trading environment within the South African retail automotive sector. Manny’s legacy of inspirational leadership will be etched in the annals of the South African motor industry for eternity.”

Harvey Adler, Operational Head: Vehicle Import and Distribution at Motus Corporation, paid further tributes to Da Canha: “They say there is oil (petrol) in our blood (if you work in the motor industry), but, like the evolution of cars, this person was ahead of the game, running on Duracell batteries – no maintenance required and lasts six times longer!

“He epitomises the belief that where economies and corporations allow business to flourish then entrepreneurs will create opportunities for new businesses to develop and grow,” added Adler.

Da Canha was introduced to the local motor industry and particularly to Imperial Holdings, in the 1970’s. However, in 1986 he decided to emigrate to Australia due to political and economic uncertainty in SA. He joined Automotive Holdings, the largest privately-owned automotive group in Australia, where the concept of multi-franchise dealerships was entrenched.

However, when the business climate in South Africa was changing, with the opening of more trade opportunities, Bill Lynch, who headed up Imperial Holdings, persuaded Manny to return to South Africa. Manny agreed, but only on his terms, which included a desire to import cars.

He returned in 1995 and formed Associated Motor Holdings (AMH) under the Imperial umbrella. His arrival coincided with the introduction of the Motor Industry Development Plan (MIDP), which included a phasing down of import duties on built-up vehicles. This environment saw Manny embark on an aggressive vehicle importation growth strategy that was to continue for two decades.

Harvey Adler concluded by saying: “Age was now catching up on him – not to mention the fact that available automotive brands had been exhausted! The man was finally slowing down.

“Manny is a pioneer in the South African motor industry by growing vehicle brands, establishing world class dealership facilities. This resulted in creating employment together with a commitment to the development and education of employees, while providing the South African public with high quality products, variety, and affordable motoring.

Lindsay Bouchier’s Lifetime Achievement Award citation from NADA had this to say: “In recognition of his exemplary dedication and extraordinary contribution of many years to improving the trading environment of motor vehicle dealers. Lindsay’s legacy of outstanding contributions and diplomatic leadership will be etched in the annals of the South African motor industry for eternity.”

Paying tribute to Lindsay’s achievements, NADA Director Gary McGraw, said: “Lindsay Bouchier is the embodiment of an individual who believes in giving back to his peers and sees the retail motor vehicle business as a ‘divine calling’!

McGraw continued: “In 1992, a quiet, yet confident dealer principal walked into the NADA Border regional annual general meeting and was elected chairperson. He took on this portfolio with enthusiasm, actively tackling and addressing matters impacting on motor dealers. He did it so well that he was re-elected year after year. He held the portfolio for 25 consecutive years and is the longest serving NAGA regional chairperson and member of the NADA national executive committee.

“Lindsay was elected Border regional chairperson of the Retail Motor Industry organisation (RMI) in the same year that he became head of NADA in that region. This meant many years of involvement with the RMI board of directors, RMI audit and risk committee and MIBCO.

“Lindsay was due to retire recently, but instead joined his son in his dealership business to share his wealth of experience with the dealership team. He also took on the challenge of becoming president of MIBCO to serve the broader industry.

“If anyone deserves recognition for a NADA Lifetime Achievement Award, it should certainly be Lindsay Bouchier,” concluded McGraw.