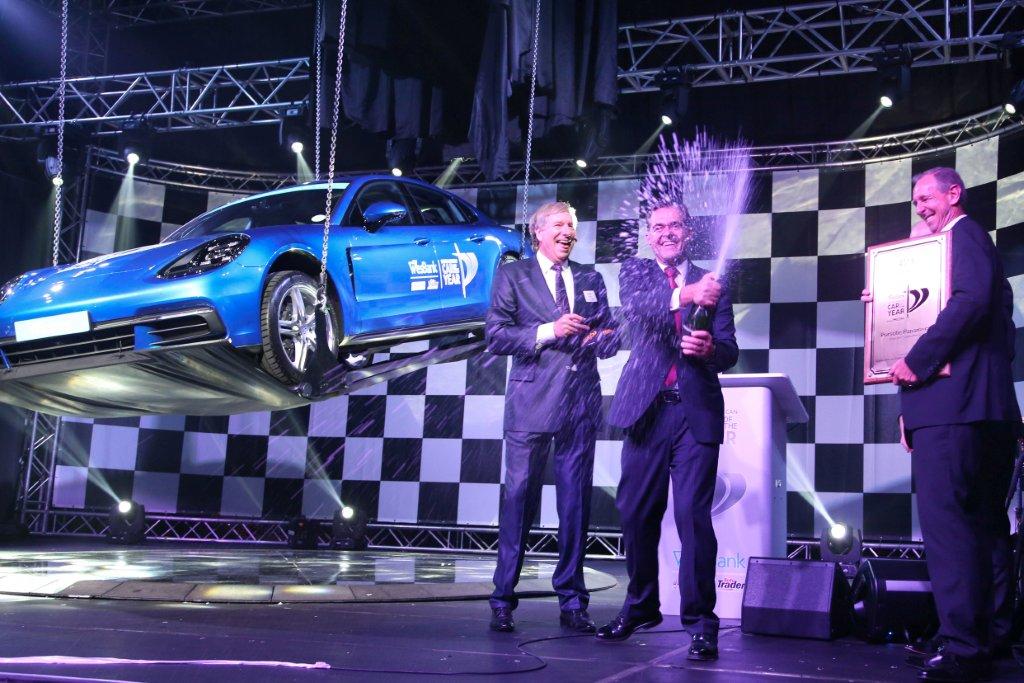 Brian Joss – Each year the South African motoring fraternity gathers to celebrate motoring excellence as represented by the WesBank South African Car Of The Year competition.

At the 33rd running of the event, the German manufacturer, Porsche, took the top honours when the Panamera was crowned the 2018 WesBank South African Car Of The Year (COTY) winner at a cocktail dinner hosted by WesBank, the competition’s headline sponsor.

Facing increasingly tough competition in this year’s 10-vehicle strong line-up – vehicles that all represent the best of the best from a cross-section of segments and price points – the Porsche Panamera is a worthy contestant which ultimately represents motoring excellence, and is a worthy winner of South Africa’s most prestigious motoring prize.

The SAGMJ has run the WesBank South African Car Of The Year competition since 1986, with WesBank – one of South Africa’s largest vehicle finance institutions – as its headline sponsor since inception. “We’re proud of our long-standing partnership with the SA Guild of Motoring Journalists, who deliver the SA Car of the Year. It is an industry award that has become the barometer for excellence, by recognising cars that set new benchmarks in their segments as well as the motoring world,” said Chris de Kock, CEO, WesBank. “Each of the finalists in the 2018 WesBank South African Car of the Year competition represent that excellence, and the Guild had an unenviable job in choosing a single worthy winner.”

“AutoTrader supports the competition both as sponsor and strategic marketing partner.” Said George Mienie, CEO of AutoTrader of this year’s result: “A Porsche winning COTY may seem a little controversial, but it shouldn’t come as a surprise. Based on AutoTrader search data, South Africans favour German vehicles – and the Panamera clearly fits the bill in this regard. While Porsche appears incapable of producing a vehicle that’s anything less than truly excellent, the Panamera specifically has won a multitude of international awards, including the highly sought-after Sports Car of the Year at the 2017 Golden Steering Wheel Awards.”

MAPO International is the official digital scoring system developer and sponsor to the competition.

The South African competition still boasts a world-first purpose-designed digital scoring system breaking new ground for vehicle evaluation and assessment. Although the scoring mechanism may have evolved, the SAGMJ continues to adhere to COTY’s most unique feature in that each of the finalists was still put through a stringent testing procedure by the peer elected COTY Jury at the world-renowned Kyalami Race Track in Midrand  Here, the winning vehicle is evaluated and scored in relation to its segment competitors, with each vehicle’s final score determined by Exterior Design & Styling; Interior Use of Materials; Interior Layout; Technology; Engine Performance; Gearbox & Transmission; Engineering Integrity & Build Quality; Ride Quality & Refinement; Steering & Handling; Affordability; Value for Money; and Overall Excellence.

Speaking before the announcement of the winner, Bernard Hellberg Jr, Chairman of the SAGMJ said: “This year’s competition was extremely fierce due to the high standards of all competitors, and as a result, no juror could accurately predict the outcome of the evaluation. What clearly emerged from this year’s scoring statistics, was that the competition was perhaps the tightest it’s ever been. It became an exercise in extreme jurisprudence to determine a winner, but that winner scored extremely highly in each category, and exhibited a high level of consistency across all scoring criteria.”

In recent years, the competition has had many historic moments, as in 2012 when Hyundai Automotive SA won the title for the first time in its history and became the first Korean vehicle brand to win the title. In 2011, the competition caused an even bigger stir when, for the first time in history, the BMW 530d and Volkswagen Polo 1.6 TDI shared the crown. In 2015, the Porsche Macan became the first SUV to win the prestigious South African COTY contest.