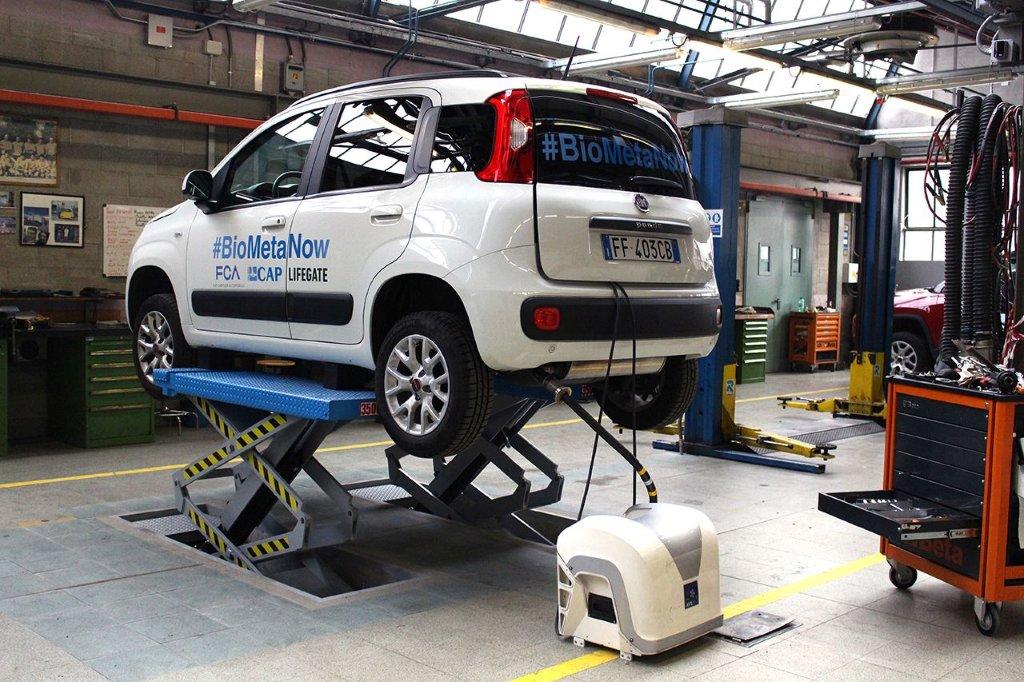 Brian Joss – This week marked the first anniversary of the trial on the Panda powered by natural gas, the biomethane produced by the wastewater treatment plant operated by the CAP Group at Bresso-Niguarda (Milan).

It was on 14 March 2017 that Elisa Boscherini (Head of FCA Institutional Relations for the EMEA area) handed the Panda to Alessandro Russo, Chairman of the CAP Group, at the Mirafiori Motor Village in Turin. This marked the start of the #BioMetaNow project, involving FCA and the CAP Group together with the LifeGate network, which promotes sustainable development in Italy.

Since then, the Panda Natural Power has clocked up thousands of kilometres, always fuelled with the CAP Group’s biomethane, and has been regularly monitored by in-depth tests performed at CRF (the FCA Research Centre) to certify that biomethane produced from sewage (just like that produced from agricultural and solid urban waste) has no contraindications or adverse effects on the engine.

The Panda has made a pit-stop at the CRF facility at Orbassano. It is undergoing two thorough inspections to confirm that, for the engine, biomethane is exactly equivalent to a natural gas of fossil origin. The first test is the exhaust emissions measurement on the roller bed to assess the catalytic converter’s efficiency, and the second is an engine performance test.

Coinciding with this anniversary, the Italian Ministries of Economic Development, the Environment and Agriculture and Forestry have just approved the inte-ministerial decree for the promotion of the use of biomethane and other advanced biofuels in the transport sector. This measure has been eagerly awaited by both the agricultural and the waste management sectors.

With this decree, Italy – already leading the way in Europe – sets itself the aim of covering 10 percent of transport energy needs from renewable sources by 2020, with an additional target for advanced biomethane and other advanced biofuels of 0.9 percent in 2020 and 1.5 percent from 2022.

Traversing many kilometres to participate at shows and events, the Fiat Panda has shown that by using biomethane it is possible to reduce emissions by 97 percent compared to the petrol model.

On 6 October the Panda Natural Power set out from its “home” treatment plant to travel to Bari where, at the National Water Festival, it welcomed visitors to the grounds of Bari University, as an example of excellence in the circular economy of the water cycle in Italy.

What’s more, the Panda #BioMetaNow was present in Milan at the Italian stage of the LNG Blue Corridor (the international project for a natural truck route linking western and eastern Europe) and its story was also told in the documents presented at the Expo 2017 in Kazakhstan.

In November the Panda took part in “Ecomondo 2017”, the leading circular and green economy fair. The #BioMetaNow project starred as an example of sustainability mobility in the LifeGate Lounge, a space which focused on the topics involving the broader Italian community on these subjects: more than six million people who dream of a sustainable world where circularity is the future, also through a large number of projects already launched by LifeGate on the site, on the social network and on the radio.

Thanks to the LifeGate “Foreste in Piedi” protected forest project, the CAP Group and FCA have committed to conserving a square metre of Brazilian Amazonian forest for every kilometre the Panda travels, proving their genuine dedication to the cause.