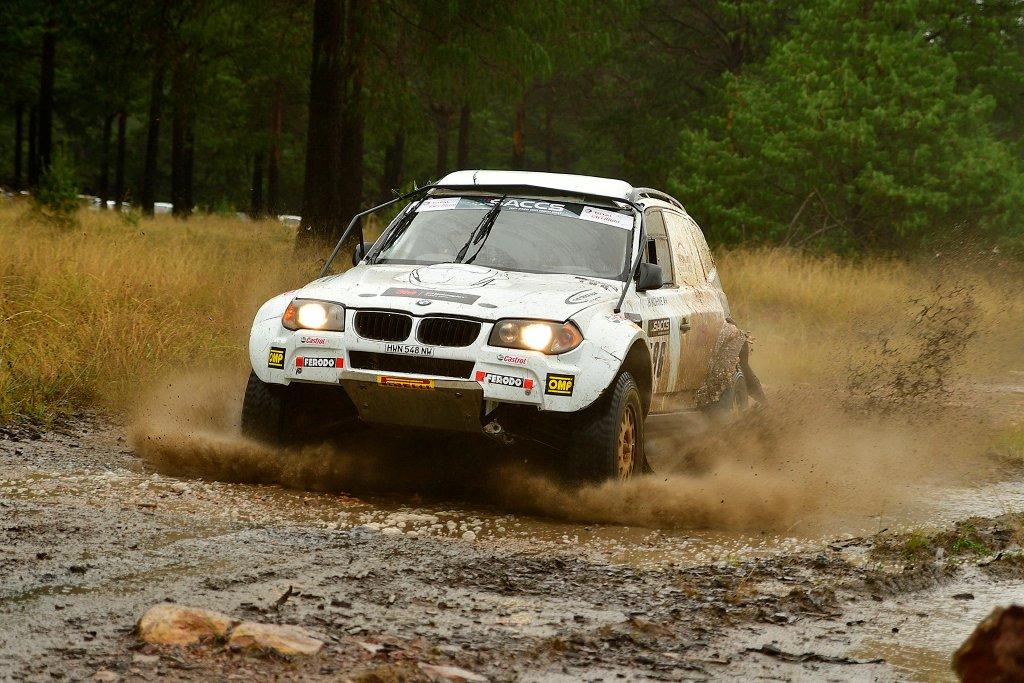 Brian Joss – The Young Guns have made a storming start to their 2018 South African Cross Country campaign, powering their Speedglas Welding Helmets BMW to fourth in class T and 10th overall on the Mpumalanga 400, which ended in Dullstroom on March 16.

Real names Richard Leeke and Henry Köhne (combined age of 52), the duo was thrilled to have been on the pace in their X3, the only BMW in a class traditionally controlled by double cab bakkies.

“It was a baptism of mud and water for Henry and me,” commented Leeke, his fire-resistant race suit still emitting a whiff of champagne from a podium shower after victory on a national championship rally a week ago. “The BMW and its V8 power is completely new to us so considering the limited time we had to test we’re really pleased to get this result after such a hectic event!”

The weather dominated what happened all weekend and with incessant rain after Friday’s qualifying prologue, Saturday dawned cool and misty – with loads of standing water which inevitably turned to slushy mud! It necessitated some juggling by the organisers, who were eventually forced to reduce the second loop by 100 kilometres, to about 70 km.

Leeke and Köhne qualified 5th in class T after Friday’s 48-kilometre run, despite some driving and navigational errors. They were also 9th overall and thrilled to be at the sharp end of the field, and with a decent start position for Saturday.

“As well as the power, the X3’s handles like a dream in rough terrain and tight turns, so we’re still recalibrating our personal limits to match those of the car. There’s definitely more to come,” said Leeke on Friday evening.

They started their 170-kilometre session in poor visibility but were having a clean and mostly fault-free run until the X3’s electrics started playing up – the cause probably as a result of the water eventually working its way into places it shouldn’t be. This affected two crucial things: the windscreen wipers stopped working but even more importantly, the engine cooling fans went on vacation.

Says Köhne: “The engine was soon running dangerously hot and the only thing we could do was park for a while and let it cool. We were stationary for at least five minutes.”

They arrived at the end of the loop after just shy of three hours of relentless concentration and nerve-wracking racing (apart from the enforced pause) and set to work tracing the fault. They eventually left the service park over 20 minutes late but without incurring a time penalty. The shortened, 70 km second loop required over 90 minutes to complete – an average speed of less than 50 km per hour.

“Without our electrical niggle we could’ve been on the podium, but I suppose everyone in this event has an ‘if’ and ‘maybe’ story,” commented Leeke.

“We’re just happy that we got to the finish in our first outing in our X3 and like the rally victory last week, a top 10 here in such difficult conditions is a great present to our new sponsor, Speedglas Welding
Helmets.”