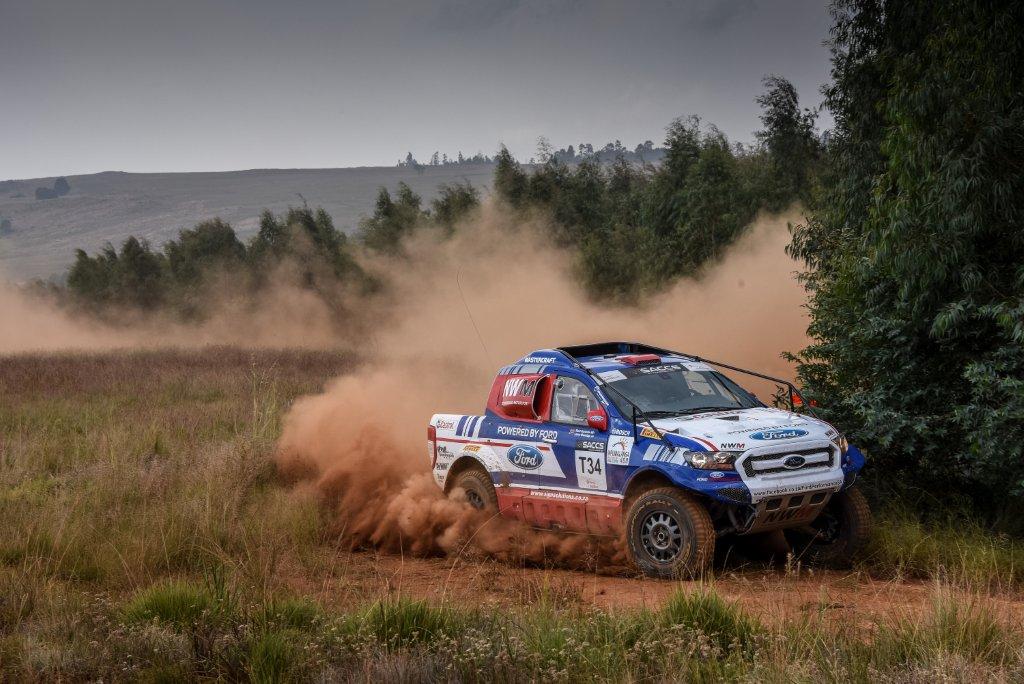 Brian Joss – The Ford Neil Woolridge Motorsport (NWM) team got its challenge for the 2018 South African Cross Country Series (SACCS) off to a winning start today by claiming victory on the season-opening Mpumalanga 400 race held in Dullstroom.

In a race plagued by heavy overnight rain that resulted in treacherous muddy conditions, Lance Woolridge and Ward Huxtable powered their Class T Ford Ranger to the top step of the Class T podium. As the runners-up in last year’s final standings, the Pietermaritzburg-based crew got one up on reigning champions Johan and Werner Horn (Toyota) who finished second – thus signalling the start of yet another thrilling battle for this year’s title.

They were joined on the podium by Brazilian Ford NWM team-mates Marcos Baumgart and Kleber Cincea, who brought their X Rally Team-backed Ranger home in an impressive third place, which is a fantastic start to their season-long campaign in the 2018 South African championship.

Gareth Woolridge and Boyd Dreyer appeared to have the measure of the field by dominating Friday’s qualifying session overall. However, their run came to a premature end on the second of the two race loops after damaging the suspension on their vehicle.

It was a warm and welcoming return to Mpumalanga for the cross country series, with the picturesque hamlet of Dullstroom playing host to its biggest sporting event ever with the arrival of the Mpumalanga 400. Renowned as South Africa’s highest town at an altitude of over 2 000m, the scene was set for an engaging tussle from the moment the first car set off on Friday’s short 48km qualifying loop.

The opening stint of the 2018 championship was dry and dusty on many of the area’s famous rally-type stages, with the young Ford NWM duo of Gareth Woolridge and Boyd Dreyer claiming the early advantage by topping the time sheets overall – even outpacing two faster full FIA Dakar Rally-specification rivals in the process.

The change in weather conditions between the 48km Friday qualifying session and the two planned loops of 170km each on Saturday couldn’t have been more different. A cold front swept over Mpumalanga on Friday night, bringing heavy rain to the high-altitude region throughout the night.

A bone-chilling drop in temperature, accompanied by thick mist and intermittent rain, greeted the teams on race day. The anticipated flat-out charge for glory become a far more tentative drive for survival in the tricky conditions, with the teams having to negotiate extremely slippery mud through the forest trails and find their way through long stretches of standing water.

This made the generally unforgiving terrain even more challenging, with front-runners Gareth and Boyd unfortunately becoming among the first to encounter trouble while opening the road for the rest of the field. They clipped a tree around 43km in the first loop, which damaged a brake pipe, and they then hit a huge rock at 120km/h approximately 30km further on, resulting in a flat tyre.

Their troubles enabled Lance and Ward to surge ahead, but the atrocious weather wasn’t doing them any favours either. Their intercom system was a casualty of one of the many water splashes, and they were forced to complete the last 60km without communications between driver and navigator. A damaged windscreen wiper blade also severely restricted visibility when it was needed most.

Nevertheless, they came into the designated service park in the lead of Class T, nearly four minutes ahead of Gary Bertholdt and Geoff Minnitt (Toyota), with Gareth and Boyd managing to hold onto third place, a further 1 min 09 sec adrift.

Having adopted a cautious but confident pace, Marcos and Kleber remained in sixth place, coming into service behind the Horn brothers and Richard Leeke/Henry Kohne (BMW).

With the inclement weather resulting in the first 170km loop taking much longer than planned, the second lap was cut to just 72km by the organisers. Fortunately for Lance and Ward, they enjoyed an incident-free remainder of the race and crossed the line first in front of the enthusiastic spectators to claim a rousing Class T victory.

Second-place went to Johan and Werner Horn, 9 minutes adrift, and this sets the scene for another exciting tussle between the Ford and Malalane Toyota team for Class T glory.

The expected comeback by Gareth and Boyd after their brakes were repaired during service unfortunately never materialised. They hit a mud splash at speed about 40km into the loop, with the front right wheel sliding into a ditch which broke the lower control arm on the right front suspension. They limped on for another 14km before coming to a halt and attempting makeshift repairs, but it was a fruitless exercise and they were forced to retire 20km from the end.

The steady approach of Marcos and Kleber ultimately paid off, as they returned to Dullstroom in third place to earn their first SACCS podium, having survived the atrocious conditions where many others fell by the wayside. It was an especially sweet experience as they had just won the opening round of the Brazilian cross country championship a week earlier – in another NWM-built Ford Ranger.

The Ford NWM team was also rewarded with the prized Manufacturer’s Award. Neil Woolridge (Team Principal), said: “This is a great result for the team in very difficult conditions, with Lance and Ward doing a fantastic job to take the win, and having Marcos and Kleber coming home third. It’s been a very busy period for the entire team preparing for the local championship and building a new car and running it in Brazil, so it’s great to walk away with the Manufacturer’s Award.

“Gareth and Boyd were spectacular in qualifying. To beat the Dakar-spec Toyotas, with the backing and the resources they have, is truly amazing. The hassles they picked up were very unfortunate, but their pace was very impressive.

It went well in qualifying and we were going nicely on the first loop until we hit a tree which damaged a wiper blade. This made it very difficult to see where we were going, but we held on and passed Gareth with his troubles.

“The second loop was actually great, as there was lots of grip and we could push much harder. The route was nice but demanding, and we were working hard the whole time. I’m very happy to start the season with a win, although it’s a pity that Gareth dropped out of the race.”

Marcos Baumgart (T20), said: “It was extremely slippery and difficult on the stage with all the mud. We came here to learn and finish the race, and we were very careful from the start. So it was fantastic to end in third place, which is a great result for us and for the entire team.”

Gareth Woolridge (T77): “We had an awesome run to win the qualifying race, and were looking forward to a great race. After hitting the tree and losing the brakes it was extremely difficult and we lost a lot of time. Despite the puncture we still managed to pit in third place, and were pushing to make up time.

“The ditch we hit was totally unexpected. We drove into a fast left-right kink and the right wheel went into a donga which broke the control arm. We tried to fix the car just to make it to the finish, but it wasn’t possible.

This is really disappointing after a great start.”

The next race is the Battlesfields 400 in Dundee, KwaZulu-Natal, on 4 and 5 May.

CAPTION: Lance Woolridge and Ward Huxtable: on the way to a Class T win in a wet and muddy Dullstroom. Picture: Quickpic