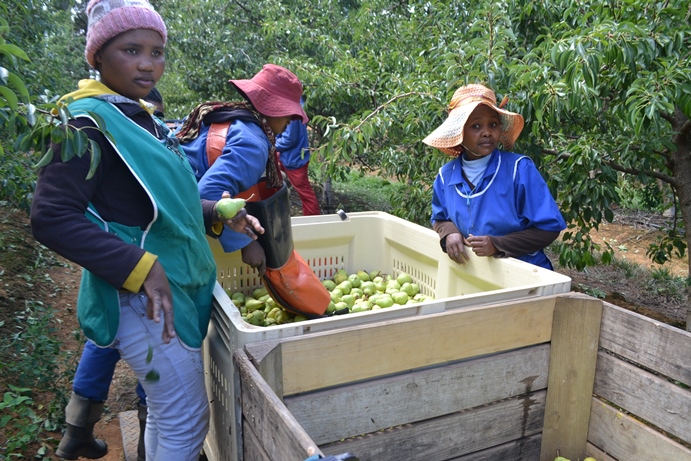 Owning a farm seemed like a distant dream to nine Belleview farm workers until the Department of Rural Development and Land Reform made them proud owners of a fruit farm located in Villiersdorp through a joint venture between farm workers and former owners.

The farm which was owned by Crookes Brothers at the time was acquired by Department of Rural Development and Land Reform through PLAS programme in 2012 to benefit eleven farm workers who worked on that very farm for many years. From the eleven beneficiaries, the two have since resigned due to involvement in other projects.

The Department held a media tour last week to showcase how the farm is doing and also for the media to experience the harvesting of apples and pears.

When speaking to media, Farm Manager Mr. Piet Davids who have more than 20 years’ experience working on that farm, said now they have a new venture called Bellcroo, where beneficiaries own 55% share of the farm and strategic partners, which are former farm owners, Crookes Brothers owns 45%.

“The future looks better for us because not many farm workers get an opportunity to be farm owners. It is challenging because we don’t have any business training, we only know farming, but we are up for the challenge. This is once in a lifetime opportunity, that you must grab when government makes it available,” said Mr Davids.

He added that as beneficiaries they decided not to take their profit share for 2 years, but to invest it back to the business, so that it can succeed.

Another beneficiary, Ms. Agnes Lekhori who is now in charge of the administration said “I have gained a lot of skills here, as a former worker myself I know what is happening in the fields and all the process that must be done before the final product. I can always assist if there is a need”.

The Belleview fruits are packed by Two A Day and Marketed via Tru-Cape Fruit Marketing (Pty) LTD for export.

Ms. Tsengelatsiwana Ntikana, Project Officer in the Overberg District Office said she is proud of Belleview Agricultural Cooperative, it is doing well and the department is making sure that the skills transfer is happening.

“At the moment the strategic partner, Crookes Brothers are busy training Mr Davids in managerial and production side, while the department is sending him for managerial course. As the department we spent R4.7 million in this farm,” said Ms Ntikana.

“Our projects are not only developing the beneficiaries, but also the communities with job opportunities. There are 11 permanent jobs that were created by Belleview project and a number of seasonal workers,” he said.