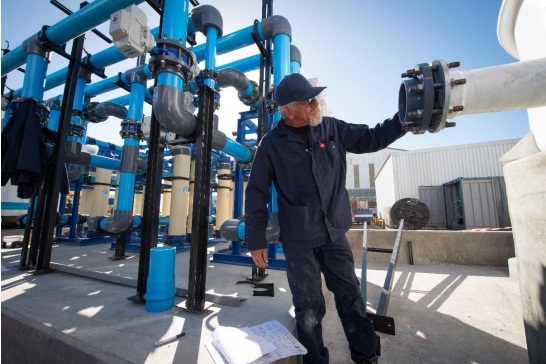 SALDANHA BAY: The installation of Sea Harvest’s desalination plant has been completed and will be launched on Thursday, 22 March 2018.

The multi-million rand investment, which includes desalination and reverse osmosis (RO), should ensure that the group can continue to operate and honour its commitment to delivering against stakeholder expectations. Since the Western Cape was declared a drought-stricken region in 2016, Sea Harvest has reduced its fresh water consumption by 35% in an effort to alleviate the pressure on this precious resource.

According to Sea Harvest Operations Director, Terence Brown, the plant will have the capacity to supply the company’s operations at its Saldanha Bay plant with all the water needed. “The most important deliverable of the plant is 1.15 ML of potable water per day. This will ensure that there is no disruption within our business should we reach ‘day zero’. In this way we can remain sustainable and profitable but most importantly protect jobs. Sea Harvest is the single largest employer within the Saldanha Bay Municipality (SBM). Anything that negatively affects our ability to operate will have dire consequences on the communities in and around which we operate. As a responsible corporate citizen, we have to do our best to prevent this from happening.”

Brown says that the quality of the water produced by the plant will meet the drinking water specification of the South African National Standard (SANS 241), which states the minimum requirements for potable water to be considered safe for human consumption. Brown adds that, “The plant is designed in such a way that the quality of the water will be monitored continuously. In addition, the SBM will provide further quality assurance by testing the water to ensure compliance with the required standard.”

o   Daily monitoring and reporting of freshwater consumption in factories

o   Installation of seawater line to hose down outside areas

o   Increased the use of rinse tubs instead of running water

o   Launched internal competitions in quarterly staff magazine to promote water saving.As a result of the above-mentioned actions, between March 2016 and December 2017, fresh water consumption at Sea Harvest was reduced by 35%.

Sea Harvest does not have a licence to distribute water and will, therefore, only be using the water produced by the plant for its operations.

CAPTIONS: Sea Harvest’s desalination plant being installed at its operation in Saldanha Bay on the Cape west coast