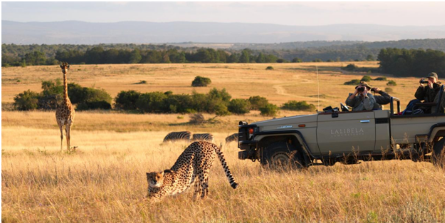 Dave Marsh assesses wildlife experiences on one of South Africa’s top tourist attractions, which traverses the Eastern and Western Cape.

Can one have an authentic Big Five game experience while on the Garden Route?

Sometimes time does not allow visitors to Cape Town to fly to another region like the Kruger National Park for a safari.

Many choose instead to do the Garden Route, primarily known for its scenery.  But thanks to strong development of wildlife reserves and lodges in recent times, the route’s attractions now extend to safari opportunities.

Tourism Update visited a selection of reserves to assess if tourists are being offered a ‘canned’ or genuine wildlife experience in this area, which, 25 years ago, had no big game reserves of note other than the Addo Elephant National Park outside Port Elizabeth.

Our test was simple: Do the reserves have the Big Five wild, are they running free and feeding themselves?

The closest Big Five experience we visited is only two hours from Cape Town in the Western Cape. Aquila Private Game Reserve might have the Big Five but this is not a wildlife experience. While the dry terrain is suitable for springbok and oryx, it cannot support a lot of the game. For many species, food has to be supplemented. The lions, which have been rescued from canned lion hunting operations, are not able to feed themselves and are kept in a 300ha enclosure.

The reserve’s proximity to Cape Town makes it popular for day-trippers who move around the park in large trucks carrying over 20 people on three-hour game drives. For people who cannot afford a safari, or just don’t have the time, the experience does enable them to see African game, even if it is not in the usual context of savannah grasslands or bushveld.  It is popular with people who want to give their children a taste of Africa.

Our next stop was one of the largest private reserves I have visited. The 58 000ha Sanbona Wildlife Reserve was the brainchild of Shamwari’s Adrian Gardiner. This is a proper safari experience, albeit in a unique environment in the Little Karoo, three hours’ drive from Cape Town.

Today it is owned by the Swiss Caleo Foundation, a philanthropic non-profit organisation that puts everything back into the Reserve and the surrounding community.

The open space, alluring stillness and isolation make this a very attractive proposition for the European market, who book out most of the rooms. It is priced from around $500 per person per night, and visitors can be fairly sure they will see at least four of the Big Five running free in the wild. As with many reserves, sighting an elusive leopard is unlikely, but visitors will soon be able to see the critically endangered Black rhino as well as the rare Cape Mountain zebra.

In addition to three luxury lodges, Sanbona has developed a camping experience option that is authentic and unusual. It also has San rock art that dates back 3 500 years on its property.

Which brings us to the other end of the Garden Route, the Eastern Cape.

The Eastern Cape used to be one of the richest wildlife areas in terms of biodiversity and it was where the legendary Big Five were first encountered. Due to hunting, farming and drought, these species and the flourishing Black rhino were eliminated.

Shamwari Game Reserve, founded 25 years ago, reversed that and introduced high-end safaris aimed at the international market.  In so doing, it ignited the imagination of others in the region so that today there are numerous opportunities for tourists to have a real safari experience.

At the top end is Kwandwe. Very exclusive, with only 26 rooms on its 22 000ha, it offers one of the best ratios of guests to land. The largest camp has nine rooms, each with its own private pool. The rates are around $1 000 per person per night. It should be noted that the guest experience here is remarkable.  If on a whim you decide you want to go on a night drive, expect to return to a bath where the water has just been drawn and bottle of champagne in an ice bucket has been placed alongside.

Kwandwe claims to be the only lodge in the Eastern Cape where each ranger is assisted by a tracker. We saw the value of that when the tracker spotted lion on the hunt on a night drive, an aardwolf and other creatures you just don’t see on a day drive. Then, of course, Kwandwe also passes the elusive leopard test. It is not unusual for there to be two or three sightings a week.

Connecting Kwandwe and Shamwari with Plettenberg Bay is an air shuttle operated by Plett Air Services. This reduces a four-hour drive to a 45-minute flight costing about $300 one way.

The most affordable option in the Eastern Cape for the Big Five is the Addo Elephant National Park, run by South African National Parks.  It was proclaimed in 1931 when almost all the wildlife in the area had been hunted out and there were only 11 elephants left. Today there are 600 as well the other Big Five species. Be warned, though, that this is not where people go for a private safari experience. This park is frequented mainly by local day visitors on self-drives. There are a number of lodges nearby where there is better accommodation and which offer game drives in open vehicles with a driver. These include Elephant House, Woodall and Figtree.

Near Addo are two other Big Five reserves that deserve mentioning. I did not visit HillsNek Lodge in the well-regarded Amakhala Private Game Reserve, but over 400 TripAdvisor reviewers have given it a score I have never seen before – the perfect five out of five. Something to visit in the future, for sure!

Lalibela is another reserve one can recommend with confidence. All the wildlife and Big Five are free-roaming. A one-hour drive from Port Elizabeth Airport on the main national coastal road, it is quick and easy to access. It has five of South Africa’s seven vegetation types, but what sets it apart is its extensive wide-open grasslands that give it the feel of the East African reserves. This means you will easily see wild animals in large numbers for a rate of about $500 per person per night, all inclusive.

Lalibela has a range of camps (choose Lentaba in winter as it has three fireplaces in the living area) to the romantic Treetops (no children under 12) to Mills Manor, the super exclusive-use renovated manor with five rooms where everything and everyone provides for your desires. In some camps, children are imaginatively catered for, including shorter game drives for the very young.

The Eastern Cape is natural Big Five country, under game repopulation, and with an increasing number of options for authentic experiences. While winter means fewer people come down the Garden Route in the middle of the year, game viewing in the Eastern Cape continues to be attractive year-round and there are winter specials to entice. When the Kruger Park private lodges are running full in August, it’s worthwhile looking at the Eastern Cape options.