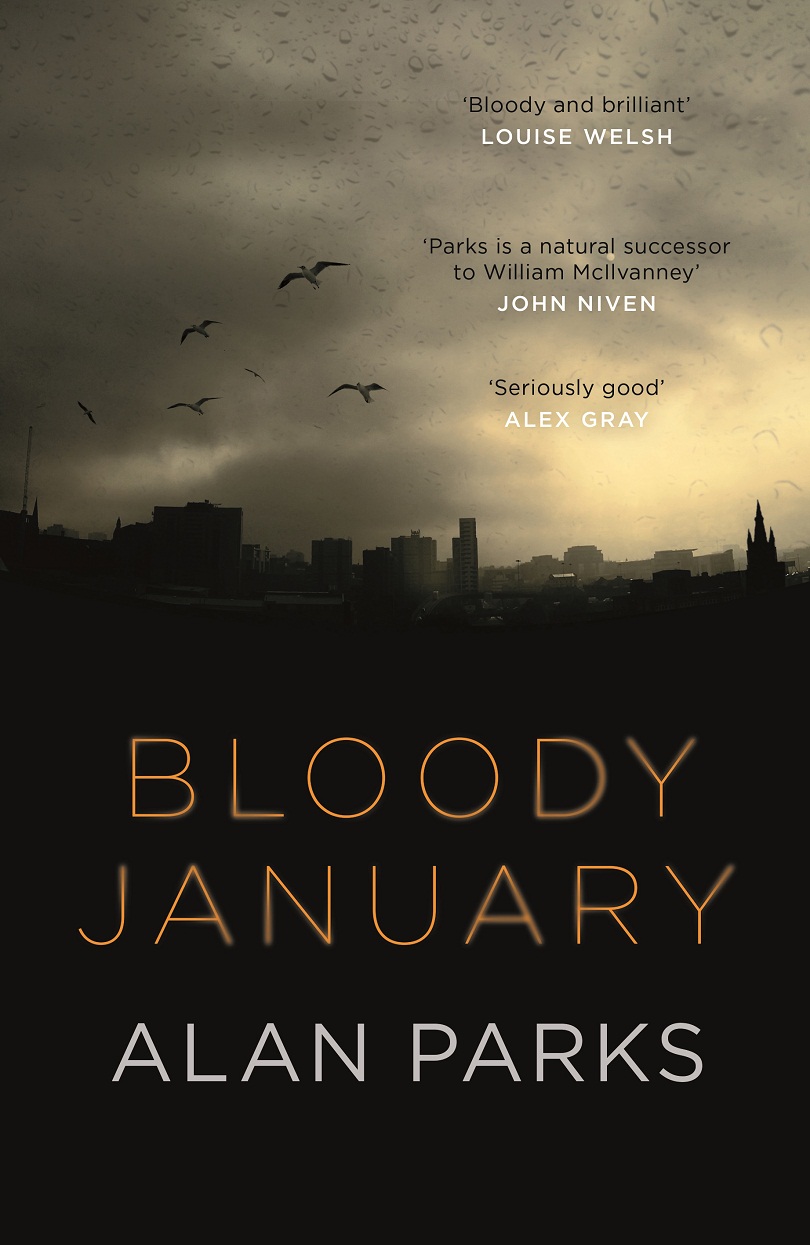 Glasgow detective Harry McCoy is the real McCoy. He’s hard-boiled, doesn’t like authority but loves his booze and the odd toke with, Janey, his prostitute girlfriend. McCoy also carries a lot of baggage and one of his childhood friends is psychopathic gang boss Stevie Cooper. Harry is not corrupt but he does owe Cooper, who is out of control since trying his own product, heroin, which is a relatively new drug on the Glasgow scene.

The action takes place in the turbulent 70s when gangs ruled and the historic Scottish city was slowly being destroyed by the plethora of motorways. Bloody January opens with a bang when a  teenage boy, small-time thief, Tommy Malone,  shoots a young woman, Lorna, dead in a busy Glasgow Street and then turns the gun on himself.  McCoy knows that there’s something more to this than a murder and suicide. A day before the shooting he was summoned to  Barlinnie by an Howie Nairn, an inmate of the celebrated Special Unit, an experiment where crims are living in the lap of luxury. Nairn tells him that the girl later identified as Lorna Skirving will be murdered the next day. And so it happens. McCoy learns that Malone  worked as a gardener for one of Glasgow’s wealthiest families, the Dunlops, otherwise known as the Untouchables, who run a secret society that thrives on extreme and violent sex.

However, his boss and mentor,  Inspector Murray doesn’t want him investigating, reminding McCoy about the run-in he had with them previously and it didn’t end well for the detective. Meanwhile Murray has saddled him with a rookie cop, Wattie, who reminds McCoy of himself when he was five years younger. The storyline speeds along at a hectic rate with many twists and turns. McCoy is beaten up with regularity, but no matter how badly, he is up and running remarkably quickly to fight another day. Parks has been in the music industry for 20 years and an interesting soundtrack runs in the background of the story: The House of the Rising Sun; Chirpy  Chirpy Cheep Cheep and Rod Stewart’s popular Maggie May, among others. There is a lot of detail, perhaps too much at times, and it doesn’t give you time to breathe. All I know about Glasgow at that time is what I’ve seen on TV and at the movies. I did spend a couple months there in the 70s and it was pretty gritty and grotty. Cold, grey and wet: the streets were mean and dangerous and the Glaswegians did warn us about the no-go areas. In Parks’s book, beneath the grime it is even dirtier with corrupt cops, violence, and a growing sex and drug trade. There is a bloody climax with a few surprises in store. Parks is the newest voice in Tartan Noir as the genre has been dubbed. Bloody January is a page-turner and I hope it’s not the first from Parks, who according to a tagline on the cover, has been ranked alongside Ian Rankin and his detective John Rebus. I don’t agree with that assessment. But he’s getting there; he just needs to produce a few more McCoy thrillers.