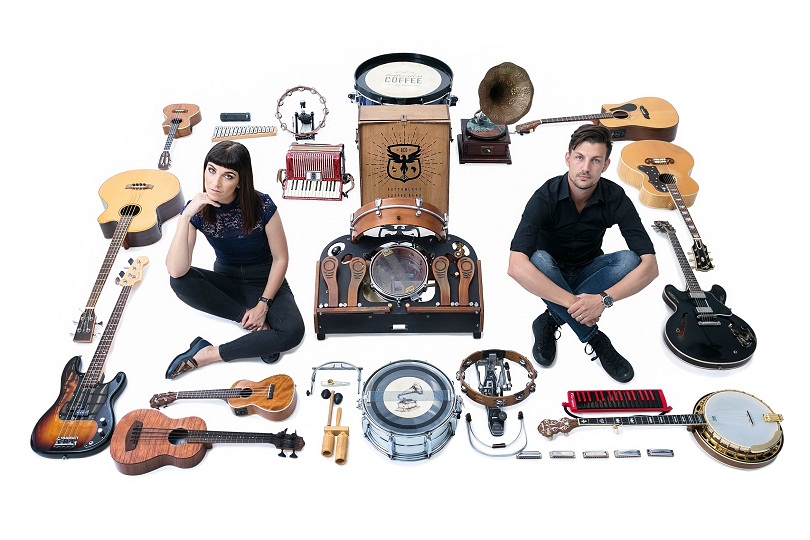 Multi-Instrumental Folk-Pop Duo Bottomless Coffee Band has steadily been making waves in the SA Music Industry and fans will be delighted with the news that their second full length album   “Anthelia” was released in February 2018. The band takes a more flavored turn with this new offering and the album consists of 11 brand new tracks. Lourens and Esté Rabé of BCB says that the aim was to make a diverse album, while maintaining the ethos of the band. They have carefully conjured up songs that stay true to their aim to “create a feel-good vibe with a strong message”. It includes gutsy social political songs with unique local flavor, crowd-favorite power ballads and goose-bump love songs. The sound is a combination of folk-pop and rock with hints of classical tones. They have even included one or two surprises for Afrikaans fans.

They have played an average of 150 shows per year since the release of their debut album “Room With A View” in 2015. The successful release lead to the couple both leaving their corporate careers to “take the leap of faith” and build a career in full-time music.

What makes their shows unusual is that Lourens and Esté, apart from the vocals, play up to 12 instruments between the two of them during their live shows.

Lourens says that his instruments are his form of absolute expression. “I was 8 years old when I saw a guy playing the drums in a movie. For the following two years I was obsessed with creating drum beats. I drove my parents crazy, carefully constructing drumkits from my mother’s’ tupperware cupboard. Eventually my parents gave in and bought me a drumkit for my 10th birthday. I still see this as my happiest childhood memory. I also started playing the acoustic guitar in high school when I discovered that I liked to sing. Since the day I picked up my first guitar, this instrument and I have been inseparable – I take it everywhere; holidays, bachelor parties, everywhere and anywhere in the house. I even took it on our honeymoon. If I don’t play for a couple of days, I crave it. I started playing the harmonica to add to the guitar as a “solo” section to a song. My friends and I would get together and have countless hours of jam-sessions, taking turns to play different instruments.  This is where I also learnt to play the bass guitar. I loved the idea of playing every section of a song on one instrument, so this eventually lead me to learn a bit of piano too; still in my opinion the most beautiful instrument in the world.

To this day I still have not had one music class in my life. An Instrument is something that grows on you; you have to allow yourself to find trust in the instrument and allow the instrument to speak to you. Every instrument has a voice, and you as the player must express its voice.

In 2015 we became the first South African owners of a Farmer Footdrum kit. This is a custom built drum kit manufactured in the USA.  It has seven pedals, which allows me to play all the beats with my two feet. This frees up my hands to play the guitars. I mostly switch between Acoustic Guitar and Electric Guitar in between songs and add the Harmonica here and there. Every now and then I also play the Banjo or the Bass depending on the different songs.”

Esté knew from an early age that she was born to make music: “When I was strong enough to pull myself up onto the piano chair, I started teaching myself the piano by ear.  I grew up in a very musical home; my dad always on the accordion or organ and my sisters on guitar, piano and vocals.  I am a “late comer” (laatlammetjie) so my earliest childhood memories were literally shaped by watching and listening to people playing instruments and singing.  I soon joined in and discovered my absolute passions to sing and play an instrument. In high school I started writing my own songs, accompanied by piano.  I also learnt the guitar. I also focused a lot on singing and acting in this time. It was only in University where I was really introduced to experimenting with different instruments.  I had classical singing training at the Stellenbosch University Conservatorium and by a turn of events also took up the clarinet.  I also tried the accordion and all the years of observing my dad playing it paid off as I learnt it rather easily. Eventually it was really Lourens who challenged me to try all the instruments that I play today.  Because we didn’t want to sound like the typical duo, we had to add more and more instruments to our set-up to create a full band sound. Currently, in one show I switch between ukulele, electric bass, UBass, accordion, glöckenspiel, foot percussion, piano and vocals. I still find lyrics, vocals and the melody to be the most inspiring part of a song and song-writing, but I really enjoy and appreciate all the different instruments that I get to play and to develop in.  It’s a beautiful journey.”

The album name, “Anthelia”, is inspired by the title track that captures the essence of what the album has to say.  It means: “The ability to see angels”.  The duo translates this into their own interpretation: “The ability to see beauty in everything and everyone around us.”

“Anthelia” is available in Musica Stores and on iTunes: https://itunes.apple.com/za/album/anthelia/1325184034