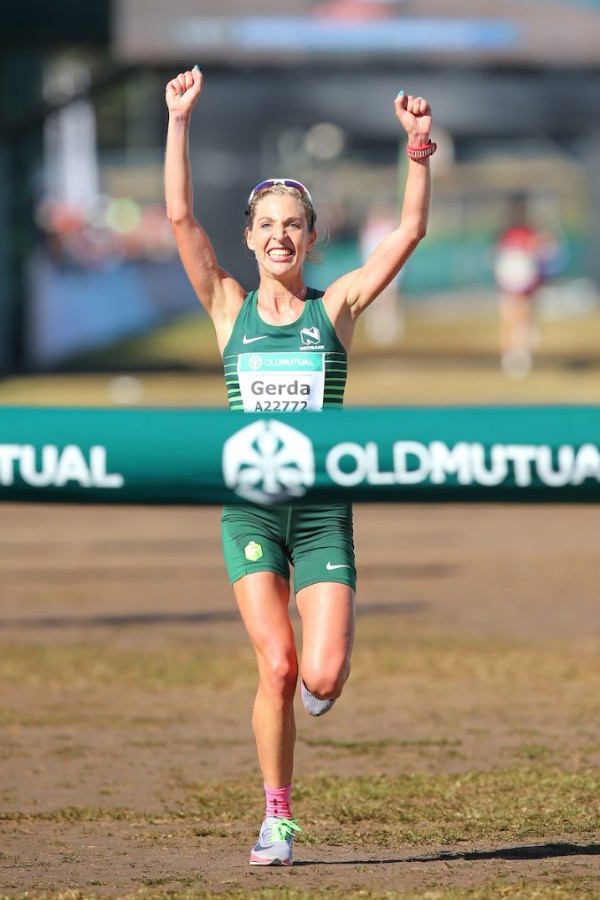 Kemboi was racing in South Africa for the first time, while for Steyn the 2018 event was just her second OMTOM race.

At one stage the men’s race was quite tight, with a group of 10 sticking together through the business part of Chapman’s Peak. Once into Hout Bay and nearing the marathon mark, Kemboi broke away from the bunch along with Lesotho runner Lebenya Nkoka (Nedbank RC International).  For a short while the pair were neck-and-neck, but ultimately Kemboi was able to pull away after the 50km mark and race to victory.

“I was not expecting to win today at all. I really just wanted to run and get an idea of the race,” said the new OMTOM champion.

“I was feeling good, though, and enjoying the run. When I got to the 42km mark, that’s when I thought I could win, so I just decided to run faster! I left Lebenya behind and went for it.”

Kemboi added that the weather conditions did not impact greatly on his race, noting that the wind was strong in parts, but not enough to ruin his experience. As a first-timer to the Old Mutual Two Oceans Marathon, he was thrilled with the crowd support.

“The support on the route was very nice. It gave me lots of energy. Every time someone cheered, I went faster.”

Kemboi has now become just the second Kenyan runner to win the 56km race around Cape Town, the first being John Wachira in 2009. The new champion thinks that statistic might change soon, though.

“I think more Kenyans will come now; we would like to bring more Kenyans to run here, maybe even dominate now.”

In the women’s race, Polish runner Dominika Stelmach was looking good for a win on her debut OMTOM, but Gerda Steyn had other ideas. After chasing Stelmach for a good portion of the race, Steyn eventually caught and passed her with UCT in sight.

“I really can’t describe how I feel, except that this is a dream come true,” said Steyn. I woke up this morning not planning to win, but just to run my best and stick to my plan. To win today is such a special moment in my career.”

The day didn’t start too encouragingly for Steyn, though, with the runner having to deal with a few niggles before hitting her stride.

“At the start I lost some time and I panicked a little bit. Then at 20km I was not feeling well at all. Thankfully I recovered from there and could then focus on the racing.” She also managed to focus on Stelmach, who was tantalisingly close in the lead position as Hout Bay neared.

“Dominika was running really well. But coming down Chappies I could see her, and from then she was always in my sights. When I caught her we had a quick chat, and I congratulated her on a great run – and then I just put my head down. At that stage I said to myself, “no looking back, just run straight to the finish.”

With SABC airing the race live on the big screen at UCT, the crowd soon realised that a local runner was about to take the title. As Steyn hit the rugby field finish, a huge roar went up.

“The crowds were so good, shouting encouragement to me all day. When I ran onto the grass at the finish, the crowd was cheering, and the commentator was saying my name, I had goosebumps to the max. That feeling is probably the highlight of my life!”

In the Half Marathon, Cape Town star Nolene Conrad (KPMG Running Club WP), fresh off her fine 25th place at the IAAF World Half Marathon Championships earlier this month, raced home to claim the women’s title. In the men’s race, David Manja (Nedbank Development Club North West) was first over the line in a thrillingly close race.

“All I can say is that I am really happy to finally get this title,” said Manja. “I have finished third twice and fourth once, so I really wanted to win. I worked hard to get this victory and I am so pleased.”

In the women’s race, Conrad went out conservatively in an effort to save energy, particularly with her recent World Half Marathon Championships efforts in mind.

“The plan was to race easy,” said Conrad, “but then everything kicked into gear and I started to feel really good. I love running in Cape Town and this is a special race, so that probably helped. I’m incredibly happy with my debut win here and thrilled to bring the title back to Cape Town.”

“When you know you are part of something much bigger than yourself and supported by thousands of others, you can do great things. A highlight of the Two Oceans Marathon is that you get to see world class runners in action and get to watch everyday runners tackle the same route,” said Thobile Tshabalala, Old Mutual Head of Brand. “Congratulations to today’s worthy winners and all who participated in another incredible day of racing.”

“It’s always a goosebumps experience to see thousands of excited runners dash away at the start, and today was no different,” added Carol Vosloo, General Manager of the Two Oceans Marathon NPC.

“While we celebrate the achievements of our top runners, it is the inspiring stories of perseverance, endurance and camaraderie that make organising the world’s most beautiful marathon truly worthwhile.”

According to Race Doctor Jeroen Swart, it was a quiet day in the medical tent, with “most of our patients suffering from cramping or post-race dizziness.”

“A small number of runners were admitted for further care and observation.”

Sadly, a Half Marathon participant experienced difficulties on Southern Cross Drive and collapsed. Despite prompt and prolonged medical attention, the runner could not be resuscitated.

Ms Vosloo confirmed the passing of a 43 year old runner. “We would like to extend our sincerest condolences to her loved ones, and also thank her fellow Club members who gave up their own finish time to remain with, and assist her.”

The runner’s family has been contacted, and no further details will be provided.