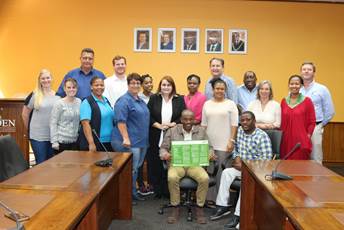 On 27 March 2018, Eden District Municipality (Eden DM) pledged its commitment to the environment when the Executive Mayor, Cllr Memory Booysen, signed the Durban Commitment, joining leading local governments from around the world as a partner in the global movement to protect biodiversity.

The document was signed during a Political Leadership Wetlands Awareness Workshop, which was sponsored by the International Council for Local Environmental Initiatives (ICLEI), as part of their Local Action for Biodiversity (LAB) Wetlands South Africa project. The Durban Commitment is a non-binding commitment and model created by local governments, for local governments and the communities they serve, in order to protect and enhance biodiversity at the local level. The workshop was attended by officials and political leaders from the district and focused on raising awareness on the value wetlands play in sustaining healthy communities and ecosystems.

Cllr Khayalethu Lose, Portfolio Chairperson of Community Services, officially opened and welcomed attendees; he acknowledged the sponsor ICLEI, and thanked them for enhancing awareness of wetlands and biodiversity.  Ms Kate Snaddon of the Western Cape Wetlands Forum presented ‘what wetlands are and why they are valuable’.

During the training, it became known that Wetlands are able to purify water by filtering pollutants out of water systems. They are also essential in protecting communities from the impacts of natural disasters such as droughts, as they are in regulating flooding impacts by reducing water flow, acting as sponges that store water and release it slowly. The severity of the impact of droughts and floods are therefore greatly reduced through the natural functioning of wetlands.

Wetlands are considered to be high-value ‘ecological infrastructure’, in that they provide critical ecosystem services within the areas where they occur. Poorer communities are most vulnerable to the impacts of wetland degradation. Many of the plants growing within and around wetlands have natural medicinal properties. Local communities harvest these plants to maintain or improve their personal health. Local communities living within the Eden District commonly harvest reeds from wetlands to make baskets and furniture, grasses for thatching and Arum lilies to sell on the side of the road.

In conclusion, the Executive Mayor of Eden DM, Cllr Memory Booysen, thanked the service providers for the insightful training session and said:  “Today, I have developed a different view pertaining to wetlands as a whole. I will definitely be an influence to other people. This was indeed an ‘eye-opener’ – I chose to never attend these kind of engagements in the past, but as from today, I am a clever mayor who will look at you from a different perspective as protectors of the environment,” Mayor Booysen said.

By signing the Durban Commitment, the Eden District Municipality pledged its dedication to wetland protection within the Eden district, as well as its commitment towards the implementation of remedial action towards the recovery of degraded and damaged wetlands.