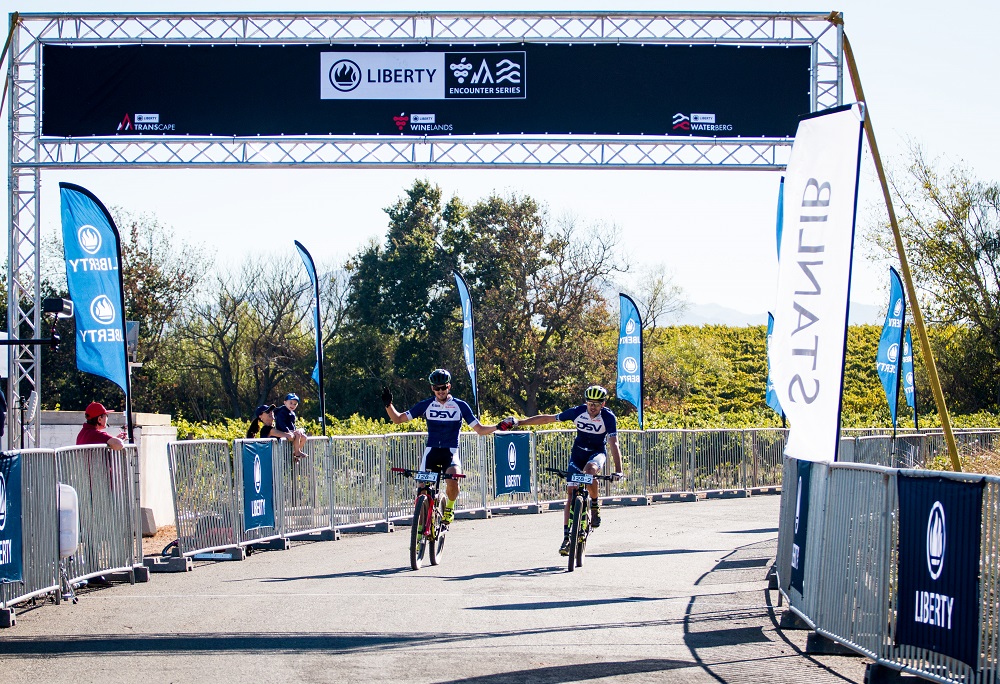 The three-stage race in the Cape Winelands, presented by STANLIB, concluded with a 50km ride from Le Franschhoek Hotel to Nederburg Wine Estate.

The DSV Pro Cycling team, who raced into the overall lead on day one, were comfortable winners after HB Kruger, who won last year with Waylon Woolcock, took a tumble and was unable to complete the stage.

Kruger and Matt Beers, riding for ASG-NAD, won the second stage and were striving to make up a two-minute gap on overall leaders Heyns and Du Toit when the accident happened 25km in.

Coming into a single-track section, Kruger said he felt his front wheel get stuck in some soft sand and he went over the handlebars.

“I damaged my right shoulder quite badly and we had to get help, so unfortunately were not able to finish the stage,” he said from hospital after having X-rays taken.

The outcome was that it left Imbuko-Momsen’s Dylan Rebello and Marco Joubert, the third-placed team overnight, to chase the overall leaders.

However, Heyns and Du Toit, from Stellenbosch and Milnerton in Cape Town respectively, proved that they were the strongest in the race by taking stage honours.

They finished just under a minute-and-a-half ahead of Rebello and Joubert, who inherited second overall after Kruger’s misfortune.

First Ascent’s Richard Simpson and Alexander Rohrer were a further six and a bit minutes back on the day to finish on the lowest step of the podium in the general classification.

After losing yesterday’s stage in a sprint, Heyns said they were motivated to win today as the three top teams led from the start.

“We were just going into a single-track section and I was in front when I heard something behind us, which turned out to be HB falling,” he said.

“Soon afterwards we realised HB and Matt weren’t with us and we later saw Dylan and Marco chasing us, so we assumed what had happened.”

Their lead was, however, never challenged as they completed a dominant weekend.

“This was definitely a good win for us, especially as we will be riding sani2c next month,” said Heyns.

“It was very special and our partnership worked well after doing the Cape Epic with each other a few years ago.

“We come from the same racing background and are comfortable on the more technical sections, so in the end it worked out well.”

Samantha Sanders of Nelspruit and Matthew Stamatis of Stellenbosch completed a clean sweep of the stages to win the mixed title.

The Home Ice Cream-dormakaba duo were followed by David George and Katie Lennard of The Gear Change and Carmen Buchacher and Paris Basson of dormakaba in the overall standings.

Sanders, who was a late entry when Stamatis was looking for a partner, said she was delighted with the victory in her first Liberty Winelands Encounter appearance.

“We went into the race with the intention of doing well,” she said, confirming that she was familiar with many of the trails in the area.

“We got off to a good lead on the first day and were able to ride consistently from then on.

“I think that was our strength because we were able to ride at a safe pace on some fairly technical and rocky sections, while maintaining an even tempo throughout.”

The women’s category went to Louise Ferreira and Marleen Lourens, who also led from the first stage.