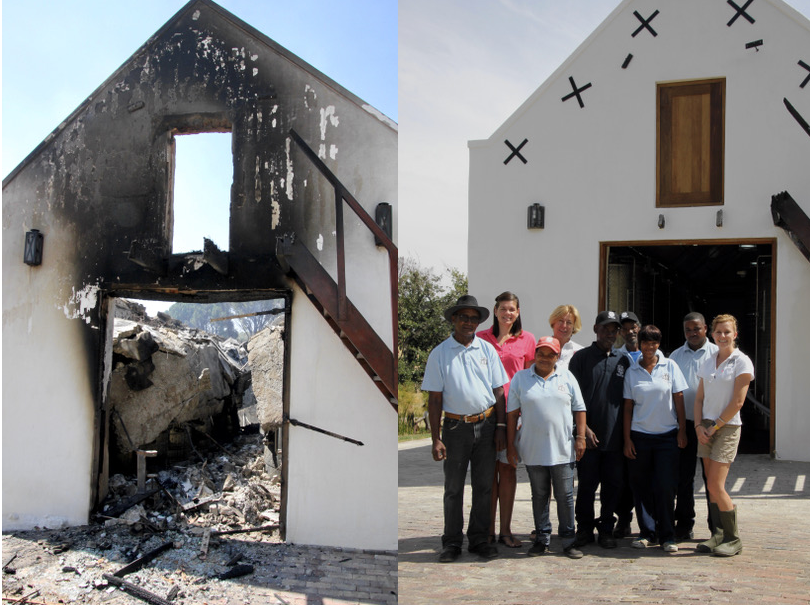 When Dorothee Kirchner stood on the dry, dusty roadway at the gates of Druk My Niet Wine Estate on the night of January 9, 2017 and watched her home burn, she faced a choice: allow the fire devastating her beloved farm to triumph, or to endure the calamity with fortitude.

The fire had started in a pine forest high on the mountainside above the farm, and the near gale-force wind drove the raging fire down the slope in minutes.

By the time farm foreman James Johanneson had hitched up a water tanker to the farm tractor and headed back up onto the farm in a brave attempt to tackle the fire, it was too late. The three guest cottages at the top of the farm were gutted, the beautiful manor house and cellar, and the farm foreman’s cottage at the gate were wreathed in flames.

“I was reading William B Irvine’s A Guide to the Good Life: The Ancient Art of Stoic Joy at the time, and as I stood there, minutes after I fled my home with nothing but the clothes on my back, I resolved to take to heart his message: let go of the past, and focus on what I could control and manage,” says Dorothee.

The scenes of devastation that greeted Dorothee, and winemaker and viticulturist, Alexandra McFarlane, the next morning were heartbreaking.

Every thatch roofed building on the farm had succumbed to the furious flames, and the damage to the vineyards was depressing, but thankfully, the buildings with IBR sheeting roofs had survived. The cellar annex which houses the office and a small barrel storage cellar, the main wine store and implement shed, the annex to the manor house, and the recently completed maturation cellar and tasting room were largely untouched.

The pending harvest, due to start in the next couple of weeks, was no more, but the estate’s wine stocks were at least, safe and secure.

Walking through the vineyards later that day, Dorothee and Alexandra were horrified by what they saw. “The fire ran through the vineyards, fed by dry brush in the mid-rows and under vine, and all I could find that was worth salvaging was a block of Merlot. All of the other blocks suffered severely scorched fruit and leaves and would never have produced quality wine. It broke my heart to see what had happened to the vines I had nurtured through the growing season,” says Alexandra.

Thankfully, the fruit which goes into Druk My Niet’s C68 Chenin Blanc comes from a neighbour’s farm, which had escaped damage, so that she could also make.

Neighbours rallied around to help, and Alexandra secured cellar space nearby, where she was able to make a small quantity of Merlot Rosé, and the C68 Chenin Blanc. “It was so heart-warming to see how our neighbours stepped up to help, from offering us accommodation, to taking up a collection for our farm foreman and his family who lost everything when their cottage burned,” says Dorothee.

Dorothee’s husband, Georg, hurried back from Germany later that day, having cut short a marketing trip. “I knew the fire damage was bad, but it was only when we walked around the farm and I saw it with my own eyes, that I realised how much we had lost.”

But like Dorothee, Georg was determined not to let the calamity get him down. “I knew we could not let the fire win. We had to rebuild.”

And thus, commenced the monumental task of rebuilding the boutique 24-hectare wine estate, nestled on the eastern slopes of the Paarl valley.

In the ensuing months, the guest cottages were rebuilt. The cellar was strengthened and restored, new tanks fabricated and installed, new stainless-steel pipework installed, and just in time for the 2018 harvest, the cellar was ready.

While some of the vines have recovered quite well, the long-term prospects of the rest are unclear. Harvest commenced on January 31, and although yields are sharply down, it is a far cry from last year.

“It has been an anxious time for us, right through pruning and the growing season, because it was difficult to determine what the long-term impact of the fire might be. Only time will tell,” says Alexandra.

After a short sharp harvest period – four weeks – there is wine in the new tanks, and vinification and maturation are underway.

“I can’t believe that it is only a year since that fire nearly broke our spirits,” says Dorothee, “but the hardships, the set-backs, the uncertainties are all behind us. We have endured, and we are set to prosper. Druk My Niet is back.”