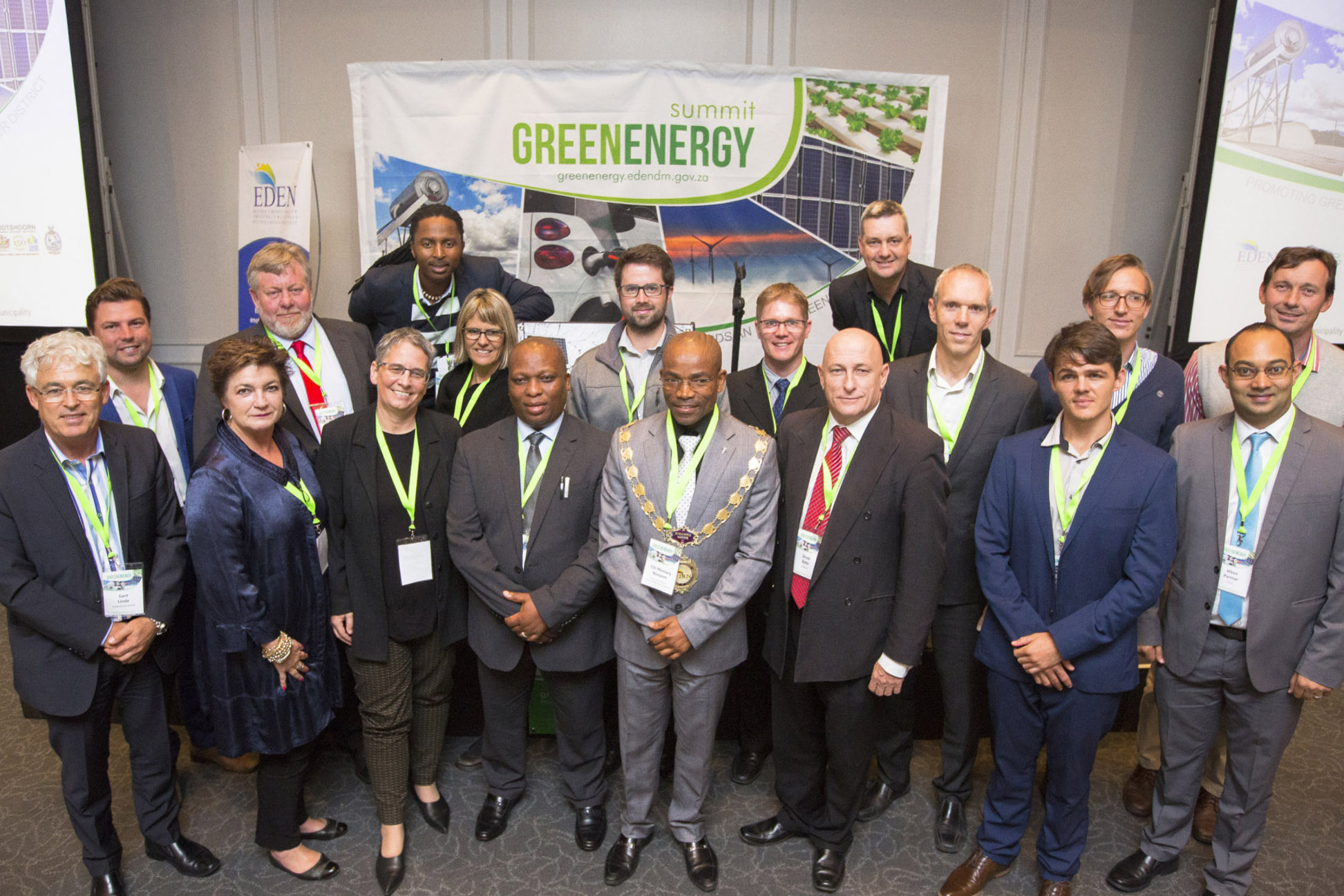 Eden District Municipality (Eden DM) hosted a Green Energy Summit on 11 and 12 April 2018 at Fancourt in George, which was themed “Promoting Green Energy initiatives towards an even Greener Eden District”.

More than 200 delegates from the public and private sectors, through their active participation in discussions about the region’s transition to a collective, sustainable and renewable energy model, have confirmed their ambition ‘green energy’. The ‘big idea’, which also forms part of the prerogative of the Western Cape Government, is to harness enough power for positive, sustainable growth that has a low carbon footprint. Added to this, the idea is to have Executive Mayors of all municipalities in the Eden district sign a declaration of intent which outlines municipalities’ drive toward sustainable energy solutions that will provide a reliable, secure, sustainable and affordable supply of electricity to communities.

While officially opening the Summit, Eden DM Executive Mayor, Cllr Memory Booysen said: ” Our district was voted the Greenest District for the past five years in a row, and this summit is yet another confirmation of our commitment towards ensuring a greener future for all.” He also explained that vulnerable members of the community require subsidized electricity and that “the district is committed to meeting their needs for affordable and reliable energy supply”.

During a press conference on 11 April 2018, Eden DM Executive Mayor, Cllr Memory Booysen said: “We are going to take up our rightful place, by positioning the Eden District on the Green Energy map”. Booysen also explained that Eden DM has a keen interest in biomass and possibly biofuel. “Our Regional Landfill site is situated next to PetroSA, which is one of the leading refineries in the world and we will leverage this strategic position to see how we can work with them in the future,” said Mayor Booysen.

As far back as 2016, Eden DM already started with its first step of going ‘greener’, when it invested in a PV Plant of 476 panels at its head office in George. The concept of Green Energy also forms part of the key priorities of the Eden DM Council and is now well reflected in its new Spatial Development Framework which was adopted and approved by the Eden DM Council on 5 December 2017.

On the second day of the Summit, the public and private sector delegates voted to pursue the following government-driven ‘green’ initiatives over the short-, medium and long-term (in order of priority):

According to Dr Hildegarde Fast, Energy Security Game Changer Lead. Department of the Premier, Western Cape Government., Solar PhotoVoltaic (PV) prices will continue to fall and level out at around R8 000 – R10 000 per kWp. Dr Fast also explained that “solar will be one of the cheapest sources of energy in South Africa and uptake of Solar PV will continue to increase”. She raised concerns about the District and its municipalities ‘lagging behind’ when specifically referring to Local Government creating an enabling environment for PV.

Dr Clinton Carter-Brown, Chief Engineer from the Council for Scientific and Industrial Research, presented interesting facts about new wind and solar PV which were installed globally. According to Dr Carter-Brown, 54GW of new wind and 70GW of solar PV capacity was installed worldwide in 2016. This is all very new, because it indicates that roughly 80% of the globally existing solar PV capacity was installed since 2013. Dr Carter-Brown also said that future key drivers in energy consumption and control would include Plug-in Electric Vehicles; Energy Efficiency; Energy Controls; Heat Pumps and Consumer Electronics.

Ms Sue Swain from Biowise / Bio Mimicry, also presented an alternative approach to ‘Green Energy’, which involves humans making use of the same system nature uses to create conditions conducive to life. She explained to the audience that becoming “Earth Savvy” is a wise decision, because there are limitless opportunities offered by the natural environment – a dynamic system; cyclical processes; inter-constructiveness; multi-functionality, to mention a few.

In closing, Mr Monde Stratu, Municipal Manager of Eden DM, said that the outcomes of the Green Energy Summit mark the beginning of the hard work ahead and that the Summit will form part of Eden DM’s Long-Term Growth and Development Strategy and an Integrated Energy Master Plan. “This Summit was part of us positioning ourselves as a ‘district of choice’, Section 84 of the Municipal Structures Act also gives us as a district the authority to distribute energy”.

The Green Energy Summit follows on the SALGA 2018 Energy Summit held on 7-9 March 2018 at the Sandton Convention Centre in Gauteng Province, under the theme “Defining the Energy Future of Local Government” between Municipalities, National and Provincial Government, together with International guests, Technology partners, Academic institutions, Business and Stakeholders within the Local Government sector, and inspired by the spirit of a new dawn of Green Energy focus in South Africa.

Read more about what was discussed at the Green Energy Summit by clicking here: http://greenenergy.edendm.gov.za/presentations/