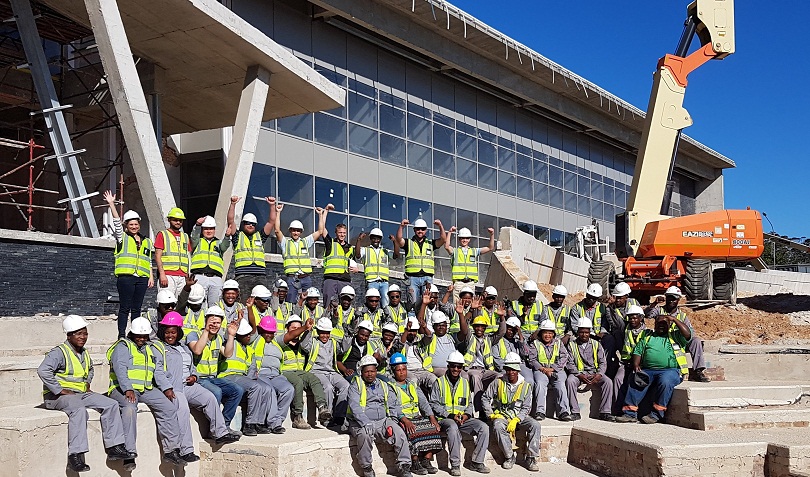 The first phase of an urban renewal project designed to bring the communities of Plettenberg Bay, Kwanokuthula and New Horizons together kicked off with the construction of the Plettenberg Bay Magistrates Court, which is now nearing completion.

The building, together with a public library and others still to be built, will provide these communities with a central civic complex called the New Horizons Precinct.

Since October 2015, specialists in large-scale construction, GVK-Siya Zama, have been busy bringing architect, Barry Kok’s vision to life. The Principle Architect at and Owner of B2 Architects, says that the building – a concrete-framed, four storey structure enveloped by a glazed curtain wall – turns its back on the N2 highway and faces the community it serves, with its large, multi-volume entrance portal inviting them in.

He shares that the only brief given to him by the Department of Justice and Correctional Services, in terms of the building’s aesthetic, was that they wanted it to be a ‘contemporary expression’. “I spent some time on a beach down in Plett where I saw rocks with cracks and fissures and went and reinterpreted that in the façade of the building through the criss-crossed beams covering the building’s exterior.”

Regarding GVK-Siya Zama’s execution of his vision Kok says: “Their attitude has been one of accommodation, understanding and trying to bring forward the vision that I originally had, as opposed to cutting corners or imparting their own ideas on the design. They asked a lot of questions to understand what my vision was so they could interpret it correctly. I have just taken my kids to see the building and it was fantastic being able to show them the final product.”

He adds: “I believe that the client is quite taken with the building and the Bitou Municipal Council has been very complimentary, with them saying that it is an asset to the urban fabric. I am overwhelmed by the response.”

Ricci Davidoff, who served as the Principal Agent on the project, shares: “The Plett Magistrates Court is a beautiful building and I think that it will become a landmark in the area.  It is not your average court house – it has a touch of class and is an exquisitely put together piece of architecture.”

GVK-Siya Zama Senior Contracts Manager, Jaco Kotze, says that the general feedback has been extremely positive and all parties seem impressed and excited for the building to become operational. “The 312 labourers from the local community who were employed on the project since commencement, together with local contractors and suppliers, can be extremely proud of the parts they all played in the successful delivery of the project.”