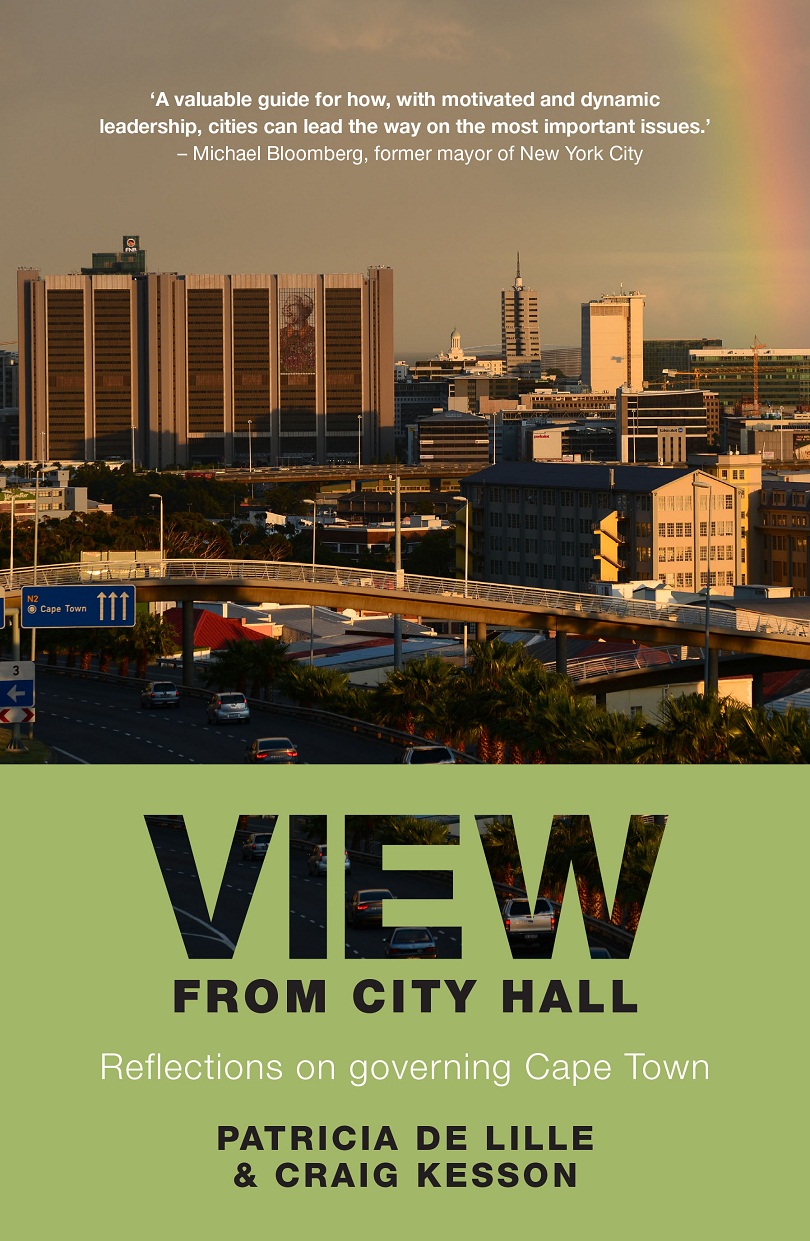 Politicians make strange bedfellows. Soon after Cape Town Mayor Patricia de Lille and her executive director and chief resilience officer Craig Kesson collaborated on the book, View From City Hall, he threatened to sue her unless she retracted statements, which he claimed were defamatory

Kesson is threatening legal action against De Lille if she fails to retract statements she made about him. This after Kesson blew the whistle on alleged corruption in the city,  claiming De Lille turned a blind eye.  The allegations are flowing thick and fast and as this review is being written De Lille is facing a disciplinary hearing and a second motion of no confidence and may yet lose her job. De Lille is also planning legal action against the DA because of the recall clause they have added to their Constitution which she alleges is aimed at her.

The book focuses on the projects that De Lille and Kesson personally led.  If you are prepared to wade through it you may have a better understanding of how cities like Cape Town work.

The introduction puts the City of Cape Town into context from the years when it was governed by the apartheid regime to post-1994 at the dawn of democracy. The transition wasn’t smooth and there were many difficulties to overcome including merging the smaller municipalities into what was then called the unicity or megacity.

One of the points the authors make is that they have tried to make the organisation more customer-focused and to become a disruptor for change or “risk being at the mercy of events that would overtake it”. Well, their disruptor strategy didn’t quite work out, especially managing the water crisis as a result of one of the worst droughts Cape Town has faced in decades. The result is plain to see: Day Zero receding into the distance and now the proposed punitive tariffs on ratepayers will see many home owners being forced to sell and move elsewhere. The chapter, Planning for Shocks and Stresses appears to be about all the meetings they attended and the resolutions they accepted or made, with little effect. It sounds like it was the usual talk shop. In fact the authors specifically mention the drought which gives the lie to what really happened. But they do say they will “increase the amount charged for water in dramatic increments and reduce pressure at certain times”. This book was written in 2017 so De Lille and Kesson must have kept the tariffs that have been proposed a secret until they released the revised draft budget in March 2018. However, the budget an ongoing process and could could roll along all year for some departments. There are also revised budgets but reading between the lines I suspect De Lille knew what was coming.

They also talk about policies that were in place and how many of them were “copied and pasted from some North American source, referring to “Native Americans” that were irrelevant to Cape Town. De Lille and Kesson say that officials were challenged to make service delivery possible (after all that is the reason for policies) and for cutting down on red tape and to give some direction to the City’s policy agenda.

Although there was a mayoral dashboard before De Lille took office it wasn’t properly monitored, they say, so it was refined to allow the mayor to monitor the performance of the administration.

There are six chapters and an Epilogue in which the authors discuss strategies to unlock the potential of South African cities. The authors posit a new funding model that will cater for the needs of those who can afford it and those who can’t. “We have to consider other forms of revenue because of changing consumer behaviour, using less electricity) and now water. De Lille and Kesson also examine the public participation process and they say that “the needs of good planning and the needs of good community engagement is difficult to negotiate”. Perhaps that’s why the City quite often ignores the wishes of  residents.

Appendix A, B and C, breaks down the City of Cape Town’s total strategy package; objectives and strategic themes and the 11 transformational priorities respectively, in bite size pieces which makes what has gone before easier to digest.

View From City Hall is a self-indulgent work. But it will appeal to students of local government and ratepayer associations to get an insight into the mayor’s thinking. Especially if they read between the lines.