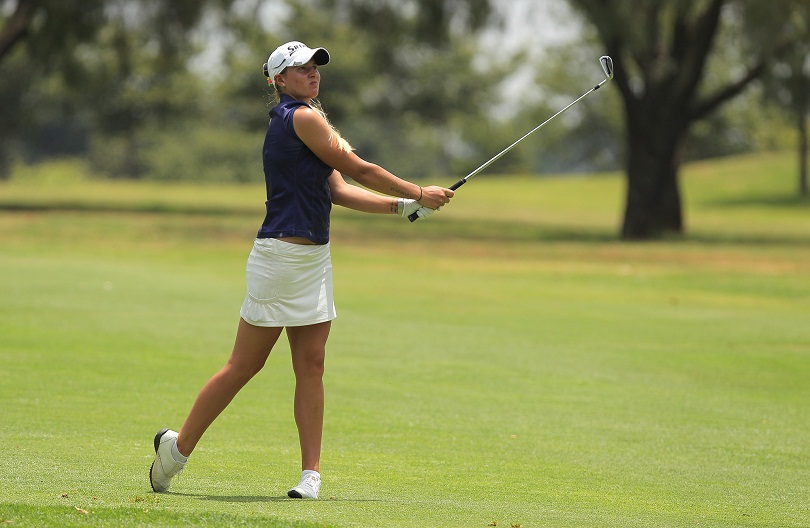 The Ekurhuleni golfer birdied the par-five closing hole for an opening three-under-par 69, which earned her a two shot lead over Western Province rising star Kaylah Williams.

Hall came into the premier women’s amateur championship on the back of three top finishes and second in the Free State Championship less than a fortnight ago. She continued her good form to take the early lead with birdies at five, six and eight. A fourth gain at the par five 13th moved the 18-year-old Ebotse golfer to four-under.

She had her first bogey of the day at 14, but rallied with a birdie at 16, before she stumbled at the penultimate hole and signed for a double bogey.

Williams’ 71 also featured a bogey and a double, but the Bellville golfer racked up birdies at 13, 14 and 17 to leapfrog a trio of player on even-par for second on her own.

Gauteng North’s Lenanda van der Watt made the most of an early start to take the early lead with a brace of birdies at the second and third. She managed to offset bogeys at 12 and 15 and a double at 17 with a pair of birdies at 16 and 18 to finish alongside Eleonora Galletti from Gauteng and Ekurhuleni teen Caitlyn Macnab.

Galletti was three-over after 10 holes, but birdied 11 and holed an eagle putt at 13 to claw her way back into contention. She dropped again at 15, but also finished in style with a birdie at the ultimate hole.

Macnab won the Ekurhuleni Open and the Champion of Champions last year and made her debut for South Africa in the victorious GolfRSA Girls Team that reigned supreme in the All-Africa Junior Golf Champion in Morocco in March. Macnab traded three early bogeys for birdies at seven, 10 and 18 to get back to level par.

Thirteen-year-old Kiera Floyd from Ekurhuleni – bidding to become the youngest champion ever in the flagship event – carded a two-over 74 to join Swiss golfer Azelia Meichtry, Chante van Zyl from Free State, Woo-Ju Son from Gauteng in joint sixth, while Zimbabwean Emily Jones and Brittney-Fay Berger from KwaZulu-Natal closed out the top 10 with a pair of 74s.

The first round of the B-Division was a closely-contested affair, but par at the closing hole earned

Kamaya Moodliar from KwaZulu-Natal pole position on 82. Sanet Pieterse from Border finished one shot adrift and local hope Lara Giddy moved into third after posting an 85.