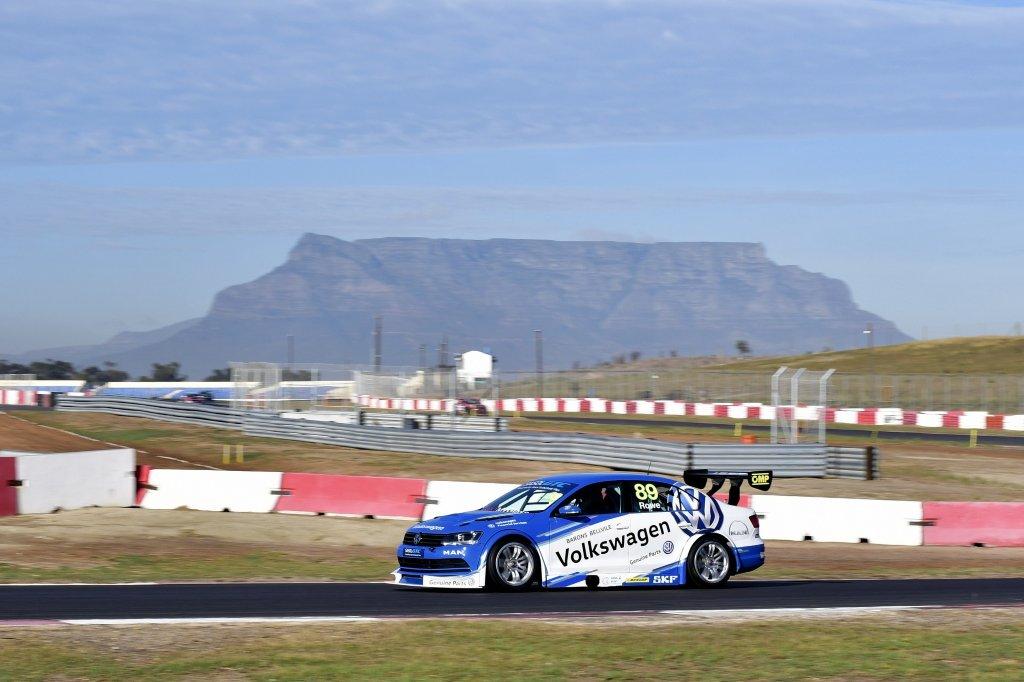 Brian Joss – Volkswagen Motorsport enjoyed its most successful Sasol GTC Championship race weekend since the inception of the series; Daniel Rowe powered his Volkswagen Jetta GTC to his maiden victory in a closely contested second race while the defending GTC2 champion Keagan Masters stormed unopposed to a pair of victories in his Volkswagen Advanced Driving Golf GTi.

The Volkswagen Motorsport squad thus took home the silverware after securing first place in three of the four races in which they competed. Mathew Hodges, racing the #57 Jetta GTC, did not have the package to replicate his Kyalami results from a month ago while team newcomer Adrian Wood (Kyocera Golf GTi) ended race two in fifth place.

Saturday’s qualifying saw Daniel line up in fifth place and Mathew in eighth position after suspension issues affected the latter’s times. In the front-wheel drive GTC2 class, Keagan took a solid pole position with Adrian in fifth place on the grid.

In the first race Daniel was involved in a four-way scrap third before a minor error saw him drop back to his original fifth place at the flag. Mathew, sensing his car was not up to the task in the first race took a strategic decision to preserve both his car and tyres to start the second race from pole position.

Keagan raced to an untroubled GTC2 victory, powering his Golf GTi home some two seconds ahead of his nearest rival. Adrian was in the wars being bumped and bashed as he fought his way through the eight lap race to finish in fifth spot.

From the inverted grid, Mathew launched into the lead but was quickly overhauled by the chasing pack. Daniel made a strong start, passing Johan Fourie (BMW), Mathew and Robert Wolk (BMW) in quick succession, taking the lead on lap five of the ten lap race. From there it was a matter of concentrating on building his margin; after ten fantastic laps of racing, Daniel claimed his career-first GTC victory with a margin of 2.6 seconds.

In GTC2, Keagan drove a calculated race, timing each overtaking move carefully to avoid any risks and make the pass count each time. With two laps remaining he again showed why he is the champion taking the lead after starting from the rear of the inverted grid.

“It feels awesome to win my first GTC race”, said Daniel after the race.

“It has been a great day for the whole Volkswagen Motorsport Team. From fourth on the grid I quickly passed Johan and Mathew before setting off after Robert. I reeled him in and made my pass stick through turn four.

After that I focussed on building a comfortable gap”.

Volkswagen Motorsport Manager Mike Rowe said: “It doesn’t get much better than this! The whole team has made a tremendous effort and this is fantastic result for everyone. Daniel won from fourth place and set very consistent lap times once he was ahead. Keagan is a class act and is coming of age as a complete racing driver. Most importantly, all the cars are intact so we can do some testing and further development ahead of the next round”.

Volkswagen Motorsport heads to Zwartkops Raceway for round three on the GTC Championship on May 12.